Novel devices can Be folded, cut, attached to surface

September 8, 2020  By Kim Horner, The University of Texas at Dallas

University of Texas at Dallas researchers and their international colleagues have developed a method to create micro LEDs that can be folded, twisted, cut and stuck to different surfaces. The research, published online in June in the journal Science Advances, helps pave the way for the next generation of flexible, wearable technology. 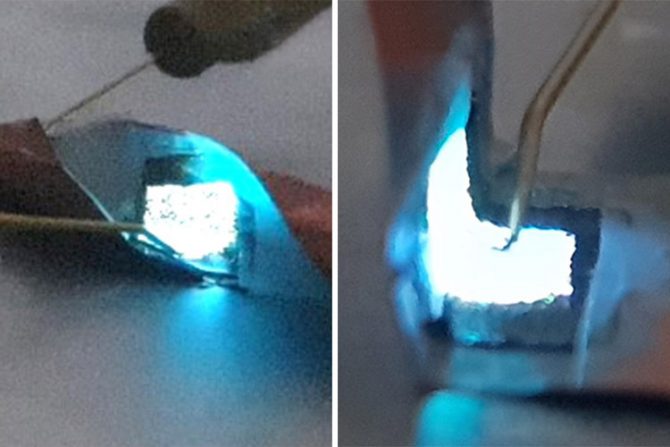 The flexible micro LEDs can be twisted (on left) or folded (on the right). The LEDs, which can be peeled off and stuck to almost any surface, could help pave the way for the next generation of wearable technology.
Source: University of Texas at Dallas

Used in products ranging from brake lights to billboards, LEDs are ideal components for backlighting and displays in electronic devices because they are lightweight, thin, energy efficient and visible in different types of lighting. Micro LEDs, which can be as small as 2 micrometers and bundled to be any size, provide higher resolution than other LEDs. Their size makes them a good fit for small devices such as smart watches, but they can be bundled to work in flat-screen TVs and other larger displays. LEDs of all sizes, however, are brittle and typically can only be used on flat surfaces.

Transfer it onto clothing or even rubber

“The biggest benefit of this research is that we have created a detachable LED that can be attached to almost anything,” said Dr. Moon Kim, Louis Beecherl Jr. Distinguished Professor of materials science and engineering at UT Dallas and a corresponding author of the study. “You can transfer it onto your clothing or even rubber — that was the main idea. It can survive even if you wrinkle it. If you cut it, you can use half of the LED.”

Researchers in the Erik Jonsson School of Engineering and Computer Science and the School of Natural Sciences and Mathematics helped develop the flexible LED through a technique called remote epitaxy, which involves growing a thin layer of LED crystals on the surface of a sapphire crystal wafer, or substrate.

Typically, the LED would remain on the wafer. To make it detachable, researchers added a nonstick layer to the substrate, which acts similarly to the way parchment paper protects a baking sheet and allows for the easy removal of cookies, for instance. The added layer, made of a one-atom-thick sheet of carbon called graphene, prevents the new layer of LED crystals from sticking to the wafer.

Can be attached to almost anything 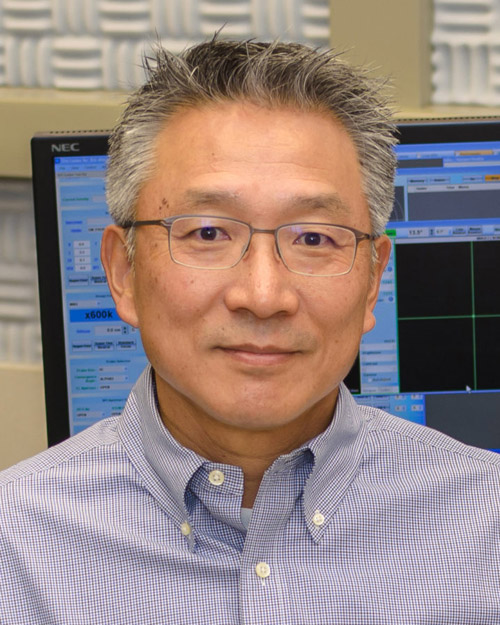 “The biggest benefit of this research is that we have created a detachable LED that can be attached to almost anything. You can transfer it onto your clothing or even rubber — that was the main idea. It can survive even if you wrinkle it. If you cut it, you can use half of the LED.”

“The graphene does not form chemical bonds with the LED material, so it adds a layer that allows us to peel the LEDs from the wafer and stick them to any surface,” said Kim, who oversaw the physical analysis of the LEDs using an atomic resolution scanning/transmission electron microscope at UT Dallas’ Nano Characterization Facility.

Colleagues in South Korea carried out laboratory tests of LEDs by adhering them to curved surfaces, as well as to materials that were subsequently twisted, bent and crumpled. In another demonstration, they adhered an LED to the legs of a Lego mini-figure with different leg positions.

Bending and cutting do not affect the quality or electronic properties of the LED, Kim said. The bendy LEDs have a variety of possible uses, including flexible lighting, clothing and wearable biomedical devices. From a manufacturing perspective, the fabrication technique offers another advantage: Because the LED can be removed without breaking the underlying wafer substrate, the wafer can be used repeatedly.

“You can use one substrate many times, and it will have the same functionality,” Kim said.

In ongoing studies, the researchers also are applying the fabrication technique to other types of materials.

“It’s very exciting; this method is not limited to one type of material,” Kim said. “It’s open to all kinds of materials.”

Other authors of the study were affiliated with Los Alamos National Laboratory, as well as organizations in South Korea, including Sejong University, Ewha Womans University, Korea Electronics Technology Institute, CoAsia Corp., Pohang University of Science and Technology, and Korea University. The research was funded in part by the National Research Foundation of Korea, the Korea Institute for Advanced Technology and the U.S. Department of Energy.