Tools or applications represent a totally new form of surveillance

Privacy watchdogs are voicing concerns over proposals across the country to implement smartphone apps to help track COVID-19. New Brunswick, Manitoba, Newfoundland and Labrador, and Saskatchewan are among the provinces looking at or planning on creating smartphone apps that would track a user’s whereabouts.

Alberta is the first province to launch an app. Known as contact tracing, the apps track those who the user comes in to contact with, commonly by monitoring a device’s Bluetooth signal. The use of the technology, and the information the apps gather, has become a subject of debate in Canada. 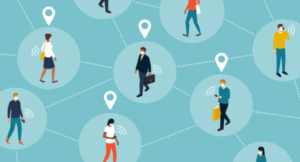 “When we develop these sorts of tools or applications, we’re entering into a totally new class or form of surveillance,” said Christopher Parsons, a senior research associate at Citizen Lab, part of the Munk School of Global Affairs and Policy. “We’ve never had that level of surveillance in this country.”

Parsons, whose research focuses on data privacy and security, said governments may have good intentions but they need to be prepared for the long-term implications of collecting such data.

Reaction to tracing apps has been mixed

“If the government doesn’t communicate what government organizations can or can’t collect with any kind of tracing application, it will almost certainly disenfranchise individuals,” he said.

The reaction at various government levels to creating and implementing the apps has been mixed. Prime Minister Justin Trudeau said the federal government has received a number of proposals but understands that Canadians value their privacy and need certain assurances.

Alberta launched its app, called ABTraceTogether, on Friday. It uses Bluetooth signals to track users and if you’re diagnosed with COVID-19, it will contact those you may have come into contact with. The province said no identifiable information is exchanged between the app users and geolocation data will not be collected. A spokesman for New Brunswick’s Ministry of Health said its app would allow those diagnosed with COVID-19 to send an anonymous message to those they have come in contact with.

Other provinces are taking a wait-and-see approach. British Columbia is not looking at contact tracing apps at this time, while a spokesperson for Ontario’s Health Ministry said no decision has been made. Only Quebec has strongly pushed back against using contact tracing technology and apps.

“Geolocation cannot replace the contact tracing actions carried out by the public-health departments. In addition, it must not at any time make it possible to identify an individual, in particular, a person suffering from COVID-19,” the Quebec Health Ministry said in a statement.

The discussion prompted Canada’s privacy commissioner to release a framework for governments. It says collected data should be destroyed when the pandemic ends and that measures must be science-based and “necessary to achieve a specific identified purpose.”

“During a crisis, laws can be applied flexibly and contextually, but they must still apply. Our framework aims to focus on what we believe are the most relevant principles in context, without abandoning others,” said commissioner Daniel Therrien.

Dr. Peter Phillips, an infectious disease expert at the University of British Columbia, said privacy rights aren’t the only issue and Canadians need to make sacrifices based on the benefit for public health.

“Rather than just assuming this is an unacceptable intrusion on people’s privacy, there are potentially substantial benefits to be had by having public health response use technology,” he said in an interview.

Phillips agreed that privacy issues must be handled carefully.

“The rights of those people who are not yet infected with COVID need to be taken into account as well, because if we don’t do everything that we can to contain this by way of public health, then people are going to get sick and some of them will die.”

Other countries using such apps are promising to keep a close eye on how the data is used and shared. Australia launched COVIDSafe and has promised to take only minimal data from its users. Italy has decreed that the information its app collects will remain anonymous and be destroyed by the end of the year.

Google and Apple to allow programming interfaces to work together

The rise in popularity of the apps even prompted a joint effort from Google and Apple to allow programming interfaces to work together to share data. Those with Android or Apple smartphone products will both be able to better share data to allow developers to create tracing apps.

The plan, the companies said, is to launch Bluetooth tracing software in the coming months. In Canada, there are concerns about oversight and guidelines on how the information will be shared.

“It really is an extraordinary invasion of privacy for a democratic state to request,” said Brenda McPhail, the director of the Canadian Civil Liberties Association’s privacy, technology and surveillance project.

She said there would need to be an equally extraordinary level of oversight. Geoffrey Rotstein, CEO of Toronto company EQ Works, said he’s aware of the concerns. His company is developing an app that would track a smartphone’s Bluetooth technology but would keep a user’s data stored on their phone, not a server.

“We believe we could develop something that becomes a very proactive notification tool,” he said. “So, we can proactively identify people in places at risk and help protect people’s lives and help get life back to normal faster.”

Canada’s chief public health officer, Dr. Theresa Tam, said this week that in addition to privacy concerns, the technology itself remains unproven and will need to be refined to ensure false positives and other issues do not emerge.

_ With files from Lee Berthiaume in Ottawa and Brenna Owen in Vancouver.