The University of Wisconsin says it has received just $700,000 of the $100 million that Foxconn Technology Group pledged to fund engineering and innovation research on the school’s flagship campus. 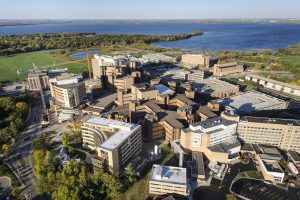 The University of Wisconsin-Madison campus. (Photo by Jeff Miller/UW-Madison)

Progress has been slow since the world’s leading electronics manufacturer made the promise in August 2018, according to a Wisconsin State Journal report Tuesday. University of Wisconsin-Madison spokesman John Lucas said there has been “no significant progress in discussions” on the investment that was touted at the time as the largest research partnership in the university’s history.

“UW-Madison is hopeful that discussions will move forward in the coming months,” Lucas said in a statement.

Statements reference $100 million donation to the school over 5 years

Despite public statements referencing a $100 million donation to the school over five years, the official partnership agreement between UW-Madison and Foxconn does not mention a specific dollar figure or when the company will provide the funds. It says Foxconn “intends to make a substantial investment in research and other activities” with the school.

Taiwan-based Foxconn declined to confirm how much money it has invested in UW-Madison, but said in a statement that it remains committed to engineering and research at UW-Madison. Foxconn will continue to “develop the demonstration projects and the strategic plans to collaboratively formulate the interdisciplinary research and education” for students and faculty, it said.

The university and company have partnered on projects with some success, including an internship program and the “Smart Cities-Smart Futures” manufacturing competition, which brought in 325 submissions from students, faculty and staff. The $700,000 was used for a sponsored engineering research project, Lucas said.

The Foxconn pledge requires UW-Madison to fundraise to match its donation. Lucas said the school has yet to launch such a campaign. Foxconn plans to build a high-tech screen manufacturing plant in southeastern Wisconsin in a nearly $3 billion contract with the state. President Donald Trump has touted the project as a sign that manufacturing is returning to the United States.