Taiwan-based CEM has been caught up in the U.S.-China trade war, while also shifting his focus toward a presidential bid 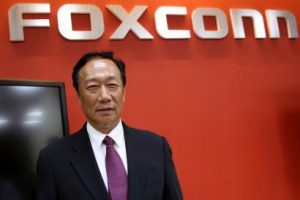 Terry Gou, chairman of Foxconn, the world’s largest contract electronic manufacturer (CEM) with customers such as Apple, said Friday he was stepping down amid speculation he could be planning a presidential run next year.  Gou, 68, made the announcement at the company’s annual shareholders meeting, where he was surrounded by an enthusiastic crowd while exiting the meeting room. Foxconn board members elected Young Liu, the head of the Foxconn’s semiconductor division, as Gou’s successor.

Gou has yet to formally announce his candidacy and he did not mention it at the meeting.

Urged Apple to move its assembly line to high-tech Taiwan

His resignation, effective July 1, is the latest challenge for Foxconn, which has been caught up in the U.S.-China trade war and a U.S. ban on supplying technology components to Chinese tech giant Huawei over security concerns. Gou told journalists he had urged Apple to move its assembly line to high-tech Taiwan, amid speculation Apple has requested that its largest suppliers, including Foxconn, consider a major shift out of China.

“Speaking on behalf of Taiwan, I am urging Apple to move (its assembly line) to Taiwan. I am urging Apple to come to Taiwan. I think this is very possible,” Gou said. “Taiwan holds a very important position in this current U.S.-China trade dispute, in this global economy reform. Taiwan is important for its technologies, geographical location, protection on intellectual property and application of new technologies.”

Gou recently has seemed to shift his focus toward a presidential bid, most likely for the opposition, China-friendly Nationalist Party. He would be bringing a pro-business and pro-China stance to what is expected to be a crowded field. Gou ranks among Taiwan’s richest people with a fortune estimated by Forbes at $7.8 billion. He says the Nationalists should hold debates to select their candidate.

His candidacy would be the first for a Taiwan business mogul and may appeal to Taiwanese dissatisfied with stagnating incomes who would like to see a different, more business-oriented style of leadership.

Incumbent President Tsai Ing-wen has been hampered by low public approval ratings and a diplomatic embargo imposed by China, which claims the island as its own territory. However, Gou is likely to face criticism from China skeptics in Taiwan over Foxconn’s 12 factories in nine Chinese cities and his close ties to the Chinese government.

Foxconn announced in 2017, to much fanfare, that it planned to invest $10 billion in the U.S. state of Wisconsin and hire 13,000 people to build an LCD factory that could make screens for televisions and a variety of other devices. After waffling earlier this year on the company’s intentions, Gou recommitted to the project in February after a meeting with President Donald Trump.