Personal robots are set to be a $19 billion market

By 2019, 42 million service bots will be operating for domestic use and 2.5 million industrial robots are expected to be part of the future workforce, says Frost & Sullivan

The rise of Artificial Intelligence (AI) technologies such as machine learning, computer vision, natural language processing, and gesture controls is changing the way personal robots are used in homes and hospitals, according to a recent report from says Frost & Sullivan. 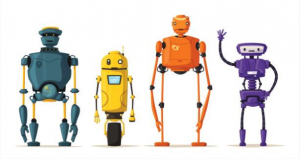 As robots become more intelligent, they will be able to sense their surroundings, avoid static and dynamic objects, understand emotions, and communicate, which will allow them to seamlessly move about in congested and crowded spaces such as homes. Advanced AI will also endow them with the intelligence to make informed decisions in real time, thereby enabling them to be fully autonomous. This opens up a range of applications in home environments, from cleaning to assisted elderly care, and support for children with special needs.

“The lack of doctors, caregivers, and primary and secondary teachers is making a strong case for the use of personal robots in the healthcare and education sectors,” said Vijay Narayanan, Visionary Innovation Senior Research Analyst at Frost & Sullivan. “With more children requiring special attention and the yearly costs of childcare escalating, there will be a huge market for robots with the ability to understand the unique needs of children and play the role of an entertainer, companion, or mentor.”

Frost & Sullivan’s recent forecast analysis identifies the various transformational shifts that are fueling the use of personal robots. It assesses the market potential for robotic applications in home environments and the cost savings they can help achieve. It also studies the disruptions robots can effect in major service industries such as hospitals, hotels, supermarkets, and logistics.

Personal robots’ application scope will expand due to growth opportunities such as:

“To enter the mainstream, robotics will have to plug the gaps in technology. Scientists are still working on improving the speech interaction, navigation capabilities, and emotion detection capabilities of the current generation of robots,” noted Narayanan. “Another important area of development is safety; firms have been incorporating worst-case execution time (WCET), which gives robots reflexes equivalent to those of a fighter pilot. In the future, robots will work in collaboration with human beings in the same environment, with enhanced human-like capabilities to carry out daily activities.”