Future Electronics has announced immediate availability of the new Avalanche board featuring Microsemi’s PolarFire FPGA along with a series of free hands-on workshops. 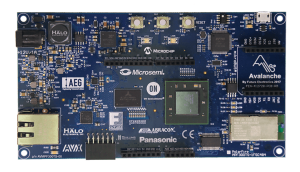 With the Avalanche board, Future Electronics has lowered the barriers for designers to access the lowest power, cost-optimized mid-range density PolarFire FPGA family. The board is a feature-rich, lowest-cost evaluation board for PolarFire FPGAs which enables designers to quickly implement prototype systems based on the unique family of FPGAs from Microsemi.  Applications such as industrial IoT, imaging, secure communications and avionics could leverage the Avalanche to jump start designs.

Engineers can quickly implement commonly required functions, as the Avalanche board carries numerous peripheral components alongside the PolarFire FPGA, including a Panasonic PAN9320 Wi-Fi networking module, 64Mbits of serial Flash memory, 4Gbits of DDR3 synchronous DRAM, a Microsemi VSC8531 10/100/1000BASE-T PHY, USB communication and Embedded FlashPro5 programming from Microsemi.  These components could allow various types of communication based systems to be prototyped quickly. For example, by leveraging the cryptographic processor in the PolarFire FPGA, one could implement a secure link between Wi-Fi and 1000BASE-T.

Future Electronics has also equipped the Avalanche board with three standard connectors directly interfaced to the PolarFire FPGA, thus enabling developers to implement their choice of peripheral components, such as sensors, drivers, displays or wireless modules. These connectors are for Arduino™ shield, mikroBUS socket and Pmod connector/interface.

“The Avalanche board is the newest addition to our family of development boards. Avalanche is the lowest cost board available in the market for this innovative PolarFire technology. We believe industrial, medical, defense and communication customers will be excited about PolarFire FPGA’s ability to deliver up to 50% lower power than other mid-range density devices,” said Martin Bernier, Director of the Engineering Support Group for Future Electronics.

The Avalanche Seminar Series will be offered in the following Canadian cities: