Bromont QC-based MiQro Innovation Collaborative Center (C2MI) has been selected as the 2017 winner of Startup Canada’s Entrepreneur Support award in the Montréal region. 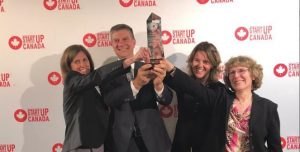 From left are: Marie-Josée Turgeon, Normand Bourbonnais and Maryse Demers from C2MI and Anne Bruneau from iBionics.

The award is given to academic institutions, government organizations or a not-for-profit business working to advance entrepreneurship in its region through its leadership, innovation and impact.

“We are proud of this acknowledgement of our work, are we not only supporting Canadian innovation but the Canadian Innovators that are at the foot of a nation’s successes,” says Normand Bourbonnais, C2MI CEO. As a regional winner, C2MI is now in the race for a national startup award.

In 2010, C2MI is recognized as a Centre of Excellence for Commercialization and Research (CECR) by the Networks of Centres of Excellence of Canada (NCE), obtaining an additional funding of $14.1M over a 5 years period. In July 2015, C2MI received an additional funding from the Government of Canada following the 2016 Centers of Excellence for Commercialization and Research (CECR) Competition. This investment of $ 8-million over five years confirms C2MI’s role with Canadian companies conducting research and development of electronic systems to accelerate the commercialization of new products.