Vantage Data Centers, a leading global provider of hyperscale data center campuses, invest an additional CAD$900 million to rapidly scale its Canadian operations, including the development of a third campus in Montreal and the expansion of two existing campuses in Montreal and Quebec City. These developments bring the total number of Vantage campuses in the Province of Quebec to four.

Vantage is further expanding its QC4 Montreal campus with a third facility totaling 21MW and 94,000 square feet, which is slated to open its doors in the fourth quarter of 2022. Once fully developed, the campus will offer customers 48MW of IT capacity and be powered by nearly 100% renewable energy from Hydro-Québec. 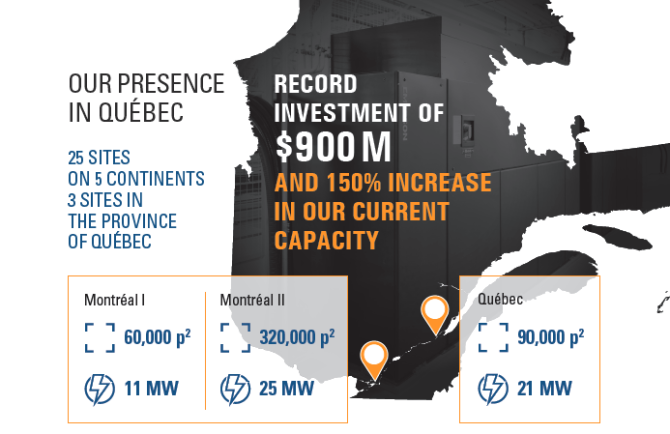 In addition, Vantage has begun construction of a third Montreal data center campus (QC6), which will also be powered with nearly 100% renewable energy.

In Quebec City, Vantage has acquired an additional eight acres of land to expand the growing QC2 campus.

Customer demand for sustainable data centers in the province is fueling Vantage’s growth in the region. The expansion of the QC2 campus is being partially funded by Société Générale, one of Europe’s leading financial services groups offering sustainability-linked financing options. A portion of the campus was approved for a “green loan,” a first for Vantage, by meeting specific requirements, including the use of nearly 100% renewable energy, the low amount of anticipated carbon emissions, water conservation, an industry-leading design Power Usage Effectiveness (PUE) and an energy management plan to ensure high operational performance.

Vantage has been aggressively expanding across the Province of Quebec since it acquired Canada-based 4Degrees Colocation from Videotron Ltd., a Quebecor Media Inc. (QMI) subsidiary, in January 2019. With these new expansions, Vantage will have four campuses totaling 143MW of IT capacity in the province with a combined investment approaching CAD$1.7 billion. The company is committed to building sustainable data center campuses and has recently pledged to reach net zero carbon emissions by 2030.

“Our continued investment and expansion in the Province of Quebec cements Vantage Data Centers as the largest hyperscale digital infrastructure provider in Canada,” said Maxime Guévin, vice president and general manager of Vantage’s Canadian business. “The Quebec Province is an ideal location for data centers due to our green and affordable power options, rich connectivity, cool climate and business-friendly culture. We look forward to welcoming our global customers to our new facilities later this year.”