INFINEON TECHNOLOGIES BGT60TR13C 60GHz chip is a complete radar system with antennas on a very small area (5 x 6.5 mm) coupled with low power consumption. Device can perceive movements in rooms or measure distances from objects in the millimetre range with utmost precision. Device enables a new form of interaction between users and their devices, using an integrated antenna system. Device senses the presence and movement of people and objects with high precision or measures distances and speeds. Chip is the base for Google’s Soli technology and has now been integrated for the first time into a smartphone, so that it can also be controlled by gestures. 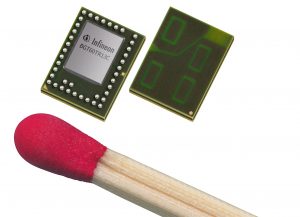