In as little as a decade, cars, buses, or trucks that run on gasoline will no longer sell. The entire market for land transport will upgrade to electrification, leading to a collapse of oil prices and the demise of the petroleum industry as we know it. Controversial? Sure. However, this is the future that Stanford University economist Tony Seba shared in his report, Rethinking Transportation 2020-2030. 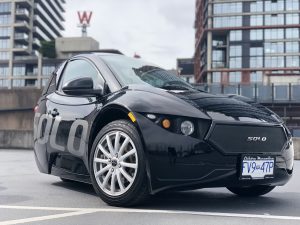 The founder of Electra Meccanica, an electric car company based out of Vancouver, certainly agrees. He understands the lifestyle and environmental aspirations of consumers, and with his roots in car racing, he is launching two attractive electric vehicles: The SOLO, a mass-market all-electric single passenger vehicle developed to revolutionize the way people commute, and the Tofino convertible, a two-seater elegant high-performance sports car.

Their overarching goal is to shut down gas stations and bring humanity into the new age, and with their car racing roots, to produce a superb driving experience while making commutes cost-effective and environmentally friendly. I recently had the opportunity to speak with Jerry Kroll, CEO, and founder of Electra Meccanica. Kroll has a long history in the racing car industry and has spent two decades as an Indycar sports agent. He founded the company in 2015.

For this column, West Tech Report speaks with Jerry Kroll, CEO, and founder of Electra Meccanica.

Q: You have accomplished a lot in three short years. What helped you get to where you are today?

“Two words: Elegant engineering. The Solo is probably the most attractive consumer product ever built. It literally describes itself just by sitting there. I think initially the Tofino is easy to understand, but the solo, a one-person electric commuter vehicle, will be a monster success. When cities start to roll in congestion fees where you pay $20 a day to get into the city, or zero because you are in a one-person commuter vehicle, then you can save over $100 a week. That’s the eye of the needle the Solo fits through.”

Q: What was the impetus for building a Canadian production volume electric car?

“I decided that fossil fuels were killing the planet needlessly, electric motors are the way to go in transportation, and can use any kind of power generation.

Q What has what has lit up the electric vehicle market?

“These new battery management systems are so powerful, so inexpensive, so small and so useful, they’re squeezing out every percentage of performance from whatever battery you put in there.”

NOTE: The SOLO and the Tofino both have had a great start. They announced in the fall of 2017 that combined corporate and retail orders amounted to 120,880 SOLO models and 39,642 Tofino models, totaling $4.38 billion (CAD) in anticipated purchase price value. 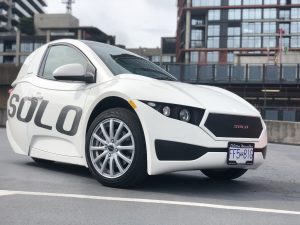 Q: Electra Meccanica’s mission is to close the last gas station – what does the future look like in your eyes?

“Gas stations are closing these days because of their land value, versus whatever profit they can make pumping gas. People will have to travel further afield to find gas, instead of just plugging in for next to free at home. In 5-8 years you’ll see about as many gas stations as you see Blockbuster video stores”.

Q: The 2-seater Tofino is estimated to sell for $50K and has a comparable range to a Tesla Model 3. How are you positioned in comparison to Tesla?

“We are positioned as a compliment to Tesla, just like an iPhone is a compliment to a larger laptop or desktop computer. Different mission, same clean technology direction. I love those guys!”

Q: Any advice for budding entrepreneurs?


“Think BIG. Really Big. There is no reason for people to be still burning gasoline into the air that children breath in the year 2018. It’s almost embarrassing. Do what you can to help the world improve the environment, health and education. We are all much more talented than we give ourselves credit for.”

To find out more about Electra Mecannica’s vision, products, and future, go to electrameccanica.com

After inquiring about how a three-wheeler vehicle could drive and feel like a car, West Tech Report columnist Soihail Kamal was invited to take the Solo for a test drive. This short trial run answered many questions for our intrepid driver.

Kamal reports: “Agile, responsive and easy to park, the SOLO feels secure like a car, but maneuvers unlike anything I have ever driven. It was a truly impressive driving experience. The Tofino, a four-wheel, two-seater, is going to make more sense to people at first, but I can understand why Kroll feels the Solo will surprise many people.”

Electra Meccanica now has over 40 staff in British Columbia and is looking to expand the development facility space tenfold. The new Solo three-wheeler tops out at 130 KM/hr and is retailing for $19,888, with production ramping up to 50,000 units in three years.