The Internet of things (IoT) trend is impacting almost every facet of modern life, ranging from smart homes to smart cities. One area which appears to hold promise for real gains in efficiency and productivity is the smart factory. Commonly referred to as Industry 4.0, the goal is to combine factory automation devices (the ‘hardware’) to information technology (IT) platforms such as manufacturing execution systems (MES), enterprise resource planning (ERP) and business intelligence (BI) systems in order to provide greater flexibility and higher efficiency to manufacturing companies.

The trend has spawned a number of fancy new buzzwords and terminology in the manufacturing industry.
Starting with the hardware which carries out all the work, there are fieldbus networks (similar to the local area networks that connect desktop computers) which link the sensors, actuators, and controllers on automated equipment. Fieldbus networks are known under many names including DeviceNet, HART and Profibus, as well as the newer Ethernet based platforms such as EtherCat and Profinet. These local hardware systems link to wireless and cellular networks through gateways and routers, commonly called ‘edge devices.’ The Cloud-based data generated is used to manage scheduling and other priorities among globally dispersed factories, and vendors have emerged to manage these device networks and systems, advertising themselves under the category platform-as-a-service (PaaS).
But with all the excitement around the software platforms, communication protocols and Cloud networks, it’s easy to forget about the foundation of industry 4.0; the hardware which does the work. High volume assembly for many products (such as iPhones) is more economically done on automatic assembly equipment than by human operators. These machines typically use a motorized belt or indexing table to move the product from one station to another, adding and modifying various components until it’s fully assembled.†The basic components of these systems include sensors, actuators, controllers, and communication devices. 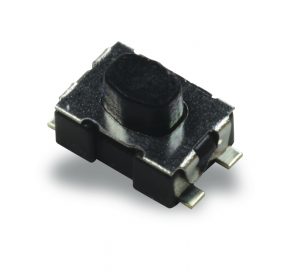 Before anything happens on the equipment, there is a need to make sure all the components and fixtures are in the correct locations. In addition, for safety reasons, the machine needs to know if any people are in areas where they could be injured.†These functions are carried out by a number of different devices including basic snap switches, capacitive and inductive proximity sensors, and photoelectric or light sensors. For the safety circuit, there are dedicated relays which monitor the inputs from emergency stop buttons and light curtains. Vacuum grippers, commonly used to grab and place small components, also require the use of pressure switches to assure the components have been placed correctly.†The sensors and switches used for these functions generally need to have small form factors and be able to withstand the harshness of a manufacturing environment.
These devices also need to be configured for things like sensitivity, delays, limits, etc when the machine is put in service or when changes are made. Typical switches are used for this function include tact and DIP switches. These ‘configuration’ switches need to have small footprints, be able to withstand exposure to oils, grease, and other chemicals, perform reliably for many cycles – and have low power consumption. The miniature tact switches used on proximity and pressure sensors must also have appropriate haptics to make it easy for technicians to set up and configure the device.

Once sensors determine that everything is safely in the correct location, components are placed into fixtures and various operations ñ including cutting, stamping, riveting and welding ñ are performed. Actuators typically come in linear or rotary configurations driven by electric motors or pneumatics. In order to function properly, these actuators use a number of devices for control and protection. With electric motors, overload relays and circuit breakers (or motor starters) are commonly used. These devices also typically require switches for setup and configuration. Tact and DIP switches (both standard and coded rotary) are commonly used to set output current levels and time delays and rotary switches are used to manually turn the device on or off. Miniature snap type switches are often used inside circuit breakers to determine trip conditions and send signals to a controller.
Relative to pneumatic actuators, valve terminals and valve controllers are used to power and control several actuators. These devices commonly use standard and rotary DIP switches for addressing and configuration. Similar to the switches used for factory automation sensors, these products need to be robust and able to perform in harsh environments. Miniature footprints, sealing against corrosive fluids and low power consumption are also key requirements for the switches used on these devices. 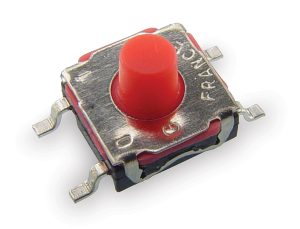 The control system takes input from various sensors and based on the control logic or program, sends signals to the actuators to carry out a variety of operations. Machine control can be carried out with a Programmable Logic Controller (PLC), a Programmable Automation Controller (PAC), or a Windows-based industrial computer. Additional components can include variable speed drives, servo-motor controllers, and power supplies.
Almost all control system components utilize some type of electromechanical switch for setup, addressing, or configuration. PLCs for example, generally use either a slide or toggle switch to change from run to program mode at setup or when changes are made. General purpose variable speed drives often use slide switches for current and voltage selection as well as standard and rotary DIP switches for configuration or to set network addresses. Embedded and industrial computers can use tact, pushbutton, or key switches for setup and operation.
The various tact, DIP, slide, and toggle switches used on these control devices need to perform reliably for many years under harsh conditions. Attributes such as small form factors, resistance to corrosion and low power consumptions are critical for proper performance.

The communication devices used for factory automation typically fall into two broad categories; fieldbus products, which connect equipment such as sensors and controllers at the shop floor level and edge devices, which connect the factory floor to the industrial Ethernet, cloud servers, and the various IT systems.
Fieldbus components allow data transfer between the sensor/actuator level and the control level and include devices such as input/output (I/O) bus modules, media and protocol converters, couplers, and repeaters. These products are generally tailored to the particular protocols used (i.e., DeviceNet, Profibus, etc).
Edge devices such as industrial modems, gateways and routers can be embedded or stand-alone components and can interface with wired or wireless components. Similar to other automation components, communication devices such as fieldbus modules and network gateways use a variety of slide switches as well as standard and rotary coded DIP switches for configuration and addressing.
Once again, while these tiny ‘configuration’ switches are only a smart part of the end device, they’re usually the part of the product the user interacts with the most ñ making them critical for communicating an image of overall product performance and quality to the end customer.