Selecting a power supply based on field lifetimes and reliability

When specifying a power supply for a new, commercial (non-military) project, Engineers face a daunting number of models and manufacturers to choose from. On-line distributors have responded with a range of search tools, allowing a potential customer to select a number of products based on the standard parameters of input and output voltage, current, power and size. The majority of these comparisons though, do not include any indication of warranty or lifetime.

Using a well-known on-line distributor’s search tool, one can reduce the number of industrial power supply choices for a 100W, 24V, enclosed-type power supply with stock in place down to a mere 18 models. This is somewhat manageable and an Engineer could potentially make a choice based on those.

A call or email to a manufacturer’s technical support team should result in the question being asked “what is your application?” Some manufacturers offer multiple grades of product ranging from low-cost power supplies to others that are designed to operate for a long period in the field. For a piece of test equipment used occasionally on a manufacturing shop floor, a low cost product choice would be acceptable. For high end capital equipment used in a remote location operating 24-hours a day, seven days a week, the product choice should not be made lightly. The cost to replace it and potential loss of service and revenue, even in a display board for a drive-through restaurant, could greatly exceed the power supply initial purchase price.

Some Engineers will look at the calculated MTBF (Mean Time Between Failures) numbers to make a decision, assuming that will give a prediction of field reliability. Since MTBF is actually the mean time between successive failures, it really applies to a part that will be repaired and returned to service. Most 100W enclosed power supplies costing less than $100 will be replaced and not repaired if a failure happens under warranty. Often a user will not even return a product for replacement, as the administration time and shipping costs are just not justified.

Even if we persevere with a calculated MTBF number comparison, the global electronics industry does not make it easy, as there are a number of standards that are used. For commercial power supplies, usually the figures are calculated at 25C, ground benign or fixed.

Below are the figures for one of TDK-Lambda’s latest power supply series – the RWS150-B. Recently the Telcordia figures were added to the power supply datasheets and reliability files, because of the 10-fold difference between Telcordia and the Japanese RCR-9102B method.

MTTF (Mean Time to Failure) would be a better number to examine, but this is not widely stated. This usually requires a large sample of products to be tested over a relatively long period of time, and the results analyzed. TDK-Lambda (and many of their customers) believes that the main wear-out component, the electrolytic capacitors, should be an essential part of comparing product lifetime. Although the manufacturers of electrolytic capacitors have dramatically increased capacitor life from offering 2,000-hour at 85C products to 10,000-hour or more at 105C, they should remain a major concern to Design Engineers.

A widely used rule of thumb is that for every 10C reduction of temperature, the capacitor life is doubled. A power supply designer can take steps to ensure that the capacitor remains as cool as possible. This can be achieved by reducing the ripple current by either using two capacitors, or utilizing a larger capacitor, but this adds cost and can increase product dimensions. A second method is to locate the capacitors away from heat dissipating components like semiconductors or magnetic components. Too often manufacturers of ‘leading power density’ power suppliers are forced to place the capacitors in very hot locations, which can compromise product field life.

Several power supply manufacturers include capacitor life calculations on their websites. The small print should be read, as convection cooled products are often assumed to have some forced air cooling available. Below are charts for TDK-Lambda’s RWS150B power supply series, which was designed for long field life without the need for external cooling. 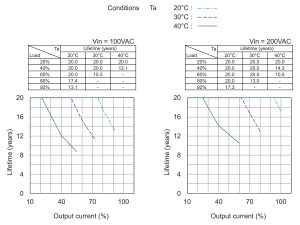 Nearly nine years ago, TDK-Lambda announced a limited lifetime warranty for their premium grade HWS series power supplies – a world first for an industrial power supply company. This differentiator was used to provide a distinct advantage during datasheet-only comparisons with competing products. The limited lifetime warranty does have some terms and conditions of course, to avoid those who have operated the product outside of their specifications or purchased them from third party sellers.
That decision was made based on product return rates and the conservatively rated capacitor temperatures. Recently two other TDK-Lambda product series have had their warranty term extended to between seven and five years.

It is recommended that an industrial power supply should be chosen to suit the application, along with the expected service life of the end equipment and the expense of system repairs. This avoids product down-time greatly exceeding the cost of the initial power supply purchase. Avoid buying a power supply purely on price and datasheet comparisons!
MTBF numbers, although useful in predicting system reliability, should be used cautiously and must be calculated to the same standard.
Electrolytic capacitors are the primary wear-out components, and this life expectation information is often provided by the larger power supply companies. The manufacturer’s warranty period reflects a level of confidence in their product designs and those capacitor temperatures, and is a useful measure for expected field life.