With ‘Energy Efficiency in Mind,’ power designers have permanently researched new ways to make power supplies more efficient and, helped by the components industry and impressive number of innovations, succeed to break several barriers that only few years ago seem to be unbreakable. In the vast variety of the power supplies industry, from Nano-watt point-of-load embedded within processors to very-high power uninterruptable power supply (UPS), silently power designers contributed to the Internet revolution which, without efficient energy management wouldn’t had happened.

We are all used to mobile devices and always complaining about battery capacity, but we should remember that such devices have moved from carrying voice to big data, requiring processors to perform at very high clock frequency, which requires a lot of power. Considering that power available within mobile devices is limited to the battery capacity and until new technologies (e.g. fuel-cell) extend that capacity by factor x10 and even more, the only way to guarantee the users will get the highest level of performances for the longest period is to manage available power in a very efficient way.

We, as engineers, all understand the relation between usability of our mobile devices and battery capacity. We are also aware about the challenges our society is facing in terms of climate changes and the necessity to reduce energy consumption, which at certain point will contribute to reduce carbon emissions.

How can we – power engineers – contribute to that and what are the technologies we should consider?

When components improvements is not enough

As mentioned in the introduction, the components industry is a very important contributor to energy efficiency improvements and the introduction of new technologies and material strongly benefited to reduce energy consumption. From the introduction of the Schottky diode, followed by MOSFET and more recently Gallium Nitride and Silicon Carbide; power supplies performances have taken several leapfrogs reaching some physical limits becoming difficult to break but not impossible (*See Figure 1). 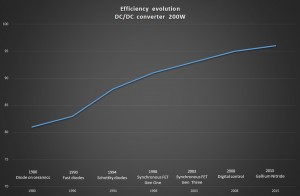 Figure 01 – Example of a 200W dc-dc converter efficiency performance in relation to technology available at time.

In parallel to components evolution, in the mid-seventies, power engineers Trey Burns, N.R. Miller, Chris Henze and others, researched on how to digitalize power conversion. In the power community, PESC 1977 is considered as the birth of digital control applied to power domain though Lack of computing power limited the possibilities to fully explore the, almost unlimited, possibilities offered by the digitalization. Several experimentations followed though it’s only in late nineties, with the commercial availability of Digital Signal Processor (DSP) C2000 from Texas Instruments, that the power industry materialized the possibilities offered by digital processing in a power system and to integrate digital control into an uninterruptable power supply.

This first application demonstrated the impressive possibilities offered by the digitalization of the power domains and how efficient it could be. It is considered as an important millstone in the power industry and with, in 2004, the materialization of industry efforts to develop a common communication protocol for power sources, the PMBus, the power industry entered into a new era.

Over the last 10 years, components and power supplies manufacturers released an amazing number of products based on digital power technology and; from point-of-load to datacenters that technology contributed to reduce energy consumption but as well, with less power dissipation, to improve reliability and reduce total cost of ownership.

DPFC – In the ac-dc domain of applications, number of active Power Factor Corrector (PFC) are digitally controlled (DPFC), optimizing on real time, performances. DPFC parameters can be dynamically adjusted to take in consideration line disturbances, environmental, load variations and other parameters optimizing the power factor quality to be always optimum. In addition to confer high performance to the final power supply, DPFC can provide information to system or site supervisor reporting on the state of operation, which in case of remote application can help to early diagnostic problems reducing risk of downtime.

Dc-dc – The switching part of the power supply is also benefiting of digital control such as dead-time and duty-cycles optimization with result to reduce power consumption in case the load below a certain point (10% to 25% depending on power and application) when conventional technology have difficulties to optimize switching conditions in low-mode operation. Digital control operate similar to having three of four different power converters optimized for a certain type of load (Low – Mid – High) which each optimized for its area of operation. Figure 2 shows comparison between two dc-dc converters with similar output power. Analog product is optimized for high performances at maximum load, showing lower performances when load decrease. The digitally controlled employs a technology similar to the one described earlier, three configurations in one power converter, adjusting operational parameters to load conditions. 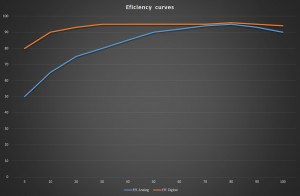 Bus voltage – Whatever the industry, Information and Communication Technology, Industrial sector, transportation, medical or defense, intermediate bus voltage is commonly used. By default and historically related to powering hard-disks, fans and switches, 12V is the de facto voltage adopted by most of the applications. If that voltage convenient when stepped down to 5V in the old days, 12V becomes less relevant when powering sub 1V processors, generating unnecessary losses, especially when operated at low load.

In 2005, Systems Architects started to explore different voltages from 8V to 13V and to consider adjusting bus voltage to load condition. In an empiric way the output voltage of the dc-dc converter was controlled by using an electronic potentiometer; adjusting the bus voltage to a signal provided by an external source. This experimentation concluded in a potential benefits of 3 to 5% energy savings but the complexity to implement such topology in an analog way limited commercial implementations.

With the introduction of digital power and PMBus, in 2010, Systems Architects revisited the 2005 experimentation and explored a modern way to adjust bus voltage to load condition. The technology known as Dynamic Bus Voltage (DBV) started to emerge with in medium power applications (e.g. micro radio nodes) a power saving up to 10%. DBV was the first application combining the benefit of a digitally controlled power source (ac-dc or dc-dc) and energy management software optimizing power distribution to operation.

Power to Processor – Microprocessors, FPGA, ASIC requires very stable voltage, with core often below one volt. For many years, processors manufacturers included a Voltage Identification (VID) system based on a matrix of pull-ups & pull-downs resistors to adjust the core voltage to demand. This technology requiring external resistors has worked for decade though not flexible when considering new applications and other type of processors. With the ability to be simply controlled by software, in close cooperation with the processor industry, Voltage Regulators manufacturers developed a concept, which is known as Adaptive Voltage Scaling. The processor and the voltage regulator becomes tightly connected and the processor able to adjust the voltage he needs through software. To accommodate that technology to existing standard, March 2014, the PMBus organization updated the standard to 1.3, including protocols for Adaptive Voltage Scaling (standard update March 2015 to 1.3.1). AVS is a new technology and not widely deployed but promised to a bright future, especially when considering new coming applications such in the Internet of Things (IoT).

Power Management 2.0 – With the emergence of new applications such IoT but as well permanent pressure to reduce energy consumption; systems architects used to software realized that it shouldn’t impossible to develop a software layer dedicated to power management, able to address from site, down to a single board. At first it seems to be utopic though, after three years of experimentations, early this year, the notion of Software Defined Power Architecture (SDPA) emerged and started to propagate throughout the power industry.

Combining, Adaptive Voltage Scaling, Dynamic Bus Voltage, switching power optimization at power supplies, intelligent sleep mode and collateral technology using digital power could reduce energy consumption is a significant scale. Too early to plot numbers but if we consider what has been achieved to make our mobile devices energy intelligent, and non-explored area digital power can address, SDPA can be considered as a new millstone changing the way power is managed but as well designed.

Some could argue that ‘Digital Power’ is a generic term and covers a very large range of applications and I fully agree. Almost 40 years after the Pioneers presented at PESC 1977, the implication of digital power management and control is everywhere and from efficiently managing the battery allocation of our phones to gigantic datacenters feeding the world with big data and in between thousand layers requiring power conversion the area of applications is huge.

One example is the Internet of Things (IoT), which is a hot topic and an area of applications that will require very efficient and flexible power solutions. We know that many IoT devices remain to be invented but what we know is those products will need power and most probably the power system will resides on-chip, which is another area where digital power associated to embedded software could excel. Developing efficient and affordable devices to power IoT is a priority and it is important to get the largest number of experts to work together to bring such type of products to a multi-billion connected devices expected to emerge in the next coming five years.

In order to address that demand, October 2015, IEEE has formed the IEEE P2415 Unified Hardware Abstraction and Layer Working Group and IEEE P2416 Power Modeling Meta-standard Working Group. Both working groups will be drafting standards that are intended to support development of more powerful and economically affordable electronics.

As the systems architects considering Software Defined Power Architecture as an important building block to achieve higher energy performances, power-aware software is a cornerstone for silicon manufacturers and Power On Chip technology to address IoT and exciting new application that remain to be invented.

As we presented in this article, from PESC 1977 to works groups formed by the IEEE organization in October 2015, power management and digital power have been a long way. Power Architects and Systems Designers are placing high expectations on software layers and we foresee that will contribute to reduce energy consumption. IoT and all new applications requiring intelligent power management are opening an amazing range of new technologies to explore, which for power designers is very engaging.

Powering the future with simplicity and energy excellence in efficiency is the grail of power designers and software defined power architecture their credo. 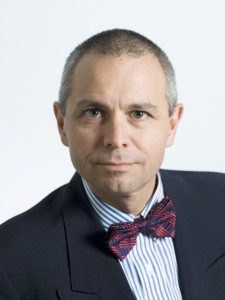 Patrick Le Fèvre worked in France, USA and China, and has developed sales and marketing activities across the Globe. He is the author of several articles and marketing papers presented at various conferences, and deeply involved in a number of groups and associations related to power-supplies, leading standardization and contributing to promote new technologies such as digital-power within the power community. Patrick Le Fèvre received most of his education in France, where he studied electronics, microelectronics and industrial marketing and where he received a civil engineer degree in 1982.

Founded in 1974, with headquarters in Sweden and local operations in 15 countries on four continents, Powerbox serves customers around the globe. The firm focuses on four major markets – industrial, medical, railway and transportation, and defense – for which the company designs and market premium quality power conversion systems for demanding applications. https://www.prbx.com