Tech Insights has seen its share of smart watches and fitness bands, including a couple, if not all, of what Samsung has on offer. One of their early fitness bands, the 2014 Gear Fit SM-R350 was followed up with the Samsung Gear Fit 2 SM-R360. Both were well designed and offered a range of features, but any activity involving water left them both… dead in the water. 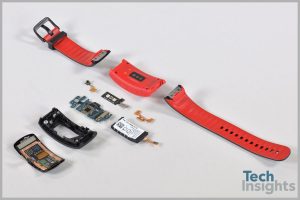 The first Gear, the Gear SM-R350, included Bluetooth connectivity, and was based on an STMicroelectronics ARM Cortex-M4 MCU. The follow-up Gear Fit 2 SM-R360 upgraded to include WiFi and GPS and was based on a Samsung Exynos 3250 Applications processor (AP). But this year Samsung jumped in to the deep end and upgraded the Gear Fit 2 series to the new 5 ATM waterproof Gear Fit 2 Pro SM-R365. It includes everything offered in the SM-R360, plus the addition of swim activity tracking.

TechInsights has already torn down the Samsung Gear Fit2 Pro SM-R365, so let’s take a short stroll and go through what we found. First, we will look at everything that was the same between the Gear Fit 2 SM-R360 and the Gear Fit 2 Pro SM-R365.

The SM-R365 has the same Exynos 3250 Dual-Core Applications processor in a Package on Package (PoP) assembly underneath the same Samsung KMFJ20005D-A213, an eMMC with 4 GB MLC NAND Flash and 512 GB LPDDR3 SDRAM mixed-memory package. 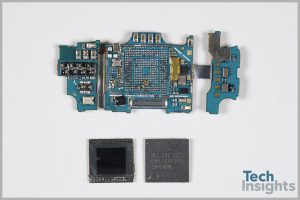 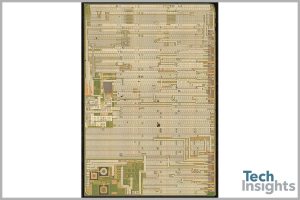 Here is something sort of new. We say ‘sort of’ because we first found the same STMicroelectronics LPS22H pressure sensor in both the SM-R350 and SM-R360 smart fitness bands. 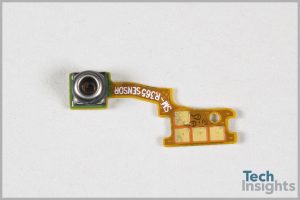 Other wearables with swim tracking, like the Casio WSD-F10 use only one sensor – the Alps HSPPAD132A – while the popular Finnish-designed Polar M600 can also track swim activities without a using a pressure sensor at all. Instead, the Polar M600 tracks swimming activities using an app and the STMicroelectronics LSM6DS2 6-axis MEMS accelerometer & gyroscope. Yes, the same STMicroelectronics LSM6DS2 found in the Gear Fit 2 fitness bands.