It goes without saying that every manufacturer wants to ensure they are producing a quality product. Standards and specifications from various organizations provide a guideline from which manufacturers can measure different areas of quality, while also providing the end user with the reassurance that they are purchasing a trustworthy, long-lasting product. Within the wire processing industry there are many standards that manufacturers may choose or be required to adhere to. These standards and specifications are constantly evolving and increasing in detail, especially as monitoring technology improves.

LV 214-4 is an automotive standard that was developed by representatives of the German car manufacturers Audi AG, BMW AG, Daimler AG, Porsche AG and Volkswagen AG. The standard outlines terminal requirements specifically for the automotive industry. The standard addresses the ability of terminals to be effectively evaluated by crimp force monitors.

To be used in an automotive wire harness, terminal must exhibit certain crimp force characteristics so that typical crimp force monitors can effectively detect critical error modes. Though it is currently in draft form and many points are still largely theoretical, the standard has been in progress for many years.

The LV looks closely at the ‘roll-in’ portion of the crimp. The roll-in area is the beginning of a crimp force curve where the terminal wings begin to roll in and close around the wire. Most monitors ignore this portion because forces are usually inconsistent and this part of the crimp process is not very important. However, LV 214-4 analyzes relative deviation and defines the positions X0 and X1.
X0 is generally where the good crimp and the insulation-in-the-crimp curves begin to diverge. X1 is generally where the good crimp and empty crimp curves begin to diverge. The LV provides a formula to determine specific locations for X0 and X1.
At this time, however, no crimp force monitor analyzes the area under the crimp curve as described in the LV. Similarly, the force curve data in the roll-in area is typically ignored during monitoring with filters. Therefore, the different area regions, X0 and X1 are theoretical and will only be considered during initial validation of the terminal.
Today’s crimp force monitors detect area differences as a result of crimp defects but analysis does not go to this detail. But the LV is not a specification on crimp monitors; it is a specification on terminal characteristics. Regardless of how the area results are calculated, when crimped, the LV mandates that a terminal must exhibit significant differences in these areas so that a crimp force monitor can accurately detect all scenarios. If not, it will not be approved for use in an automotive harness. Furthermore, typical crimp monitors are used on the production floor. Therefore, if the terminal is already on the production floor, it has already been approved so this level of detail in the analysis is not required.

The feasibility study is the testing methodology for terminals as defined under LV 214-4. It is to verify that defect modes can be detected for a terminal/wire combination. The output identifies the separation between good crimps and defect crimps. Tests must be performed using the smallest wire allowed for that terminal. For example, if the terminal is rated for 18 -22 AWG wire, 22 AWG wire should be used for testing. Although the procedure is written for initial validation of terminals, this process can be used on the production floor to determine the feasibility of any application. 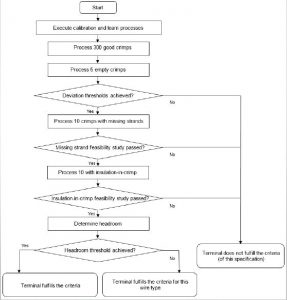 The next step is to detect insulation in the crimp. Like with missing strand detection, 10 wires must be processed with insulation in the crimp area and all must be detect as defects. LV 214-4 mandates 30% insulation inside the crimp for these tests and provides a clear method of measurement. If all are not detected as defects, the terminal fails and the test stops. If all are detected successfully, the test continues.
At this point, the operator considers the headroom. LV 214-4 states that headroom should be greater than 35%. Headroom can actually be determined much earlier on in the feasibility test, however, it is best left for last. If the terminal fails any test up until this point, the terminal does not meet the criteria of the specification and thus cannot be used in an automotive wire harness. However, if all defects are successfully detected but the headroom value is less than 35%, then perhaps special parameters are required.

The final area discussed in LV 214-4 is documentation. In order to meet LV 214-4 criteria, proper documentation must be kept of all assembly data, machine data and the results of all testing. This includes: terminal ID, crimp data, wire cross section, wire type, machine, applicator and crimp force monitor used, relative deviations, headroom, and feasibility study results. This data is used not only for internal purposes, but can also be shared with customers or manufacturers to help them understand why a specific terminal is or is not appropriate for their application.