ABI Research has been tearing down devices since 2011 and added wearables in 2013 once they had an established presence in the marketplace. Garmin released the Fenix 5 last year as their premier rugged GPS watch featuring a transflective memory-in-pixel (MIP) color display, which brightens with sunlight intensity for greater visibility. We tore down the mid-sized Fenix 5, although smaller and larger versions are available as 5S and 5X respectively. Garmin has since released an upgraded version the Fenix 5 Plus introducing features like Garmin Pay and built-in music storage.  Here’s a look at the major electrical components that make up the Garmin Fenix 5. 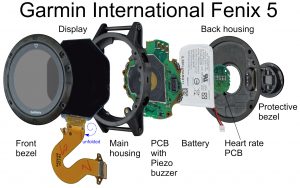 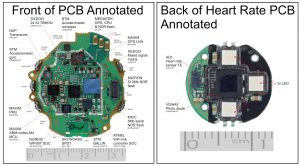 As with most wearables, the Fenix 5 is loaded with sensors. At the heart, we find ADI (Analog Devices) providing the HR sensor front end (ADPD107) with Vishay supplying the photodiode (VEMD5080X01) surrounded by three tri-LEDs. STMicro supplies two 6-axis combo sensors: accelerometer/gyro (LSM6DS3L/M) and accelerometer/e-compass (LSM303AGR). Lastly, we see the continued use by Garmin with a waterproof pressure sensor (MS5837-30BA) from MEAS (Measurement Specialties, Inc. now TE Connectivity). Notably, Garmin also used this pressure sensor in the Garmin Vivosmart 3 watch we analyzed. 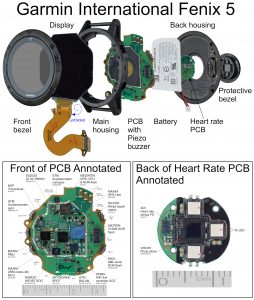 These findings are from ABI Research’s Teardowns (https://teardowniq.com/), which include high-resolution photos and x-rays, pinpoint power measurements, detailed parts lists, and block diagrams.