There is currently no universally adopted wireless audio standard. But Eleven Engineering (Eleven) is working to build it. Led by CEO John Sobota, who carries himself with the confidence and vision of an Albertan Steve Jobs, Eleven Engineering is embarking on a journey to make sound transmission from any device, as easy, or perhaps even easier, than plugging in an RCA cable into a speaker. 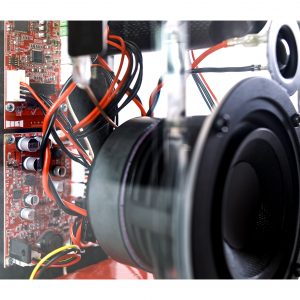 This shows a motherboard with both Eleven Engineering’s chip (Ginseng SiP = the long rectangular chip to the right of the white connector) and partner’s chip (the Infineon Merus Class D audio amp – top left chip). This ‘off the shelf’ motherboard is called Strawberry. (Photo Source: Vintage Reprise).

There are currently other ways to transmit wireless audio, namely WIFI and Bluetooth. However, none of those standards were designed specifically to address sound transmission. Wi-Fi has limited functionality, and Bluetooth requires pairing and the connection is often unreliable. These pain points are eliminated with Eleven’s new standard named SKAA, which works with iOS, Android mobile devices, Mac, Windows computers, televisions, and nearly any product with a line output, S/PDIF output or a headphone jack. What’s more, with SKAA, you can watch a movie while streaming sound to speakers without latency issues, which plague the likes of WIFI or Bluetooth systems.

In environments laden with heavy Wi-Fi and Bluetooth traffic, SKAA navigates through these hostile environments with award-winning reliability. They have spent years partnering with Bose, Harman Kardon and LG, to name a few. To date, 20 companies are integrating SKAA chips in their products.

West Tech Report recently took the opportunity to chat with Sobota, and Eleven Engineering’s executive vice president of sales and marketing, Rex Whitehead to discover how the firm got its start, and what has helped them get to the forefront of the wireless audio industry, while discussing longer-term goals for their flagship product. 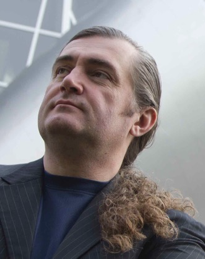 “I started my career at Transalta, and with every promotion, I felt my job becoming less enjoyable. I had a desire to do something a more high-tech,” says Sobota. When Transalta planned layoffs, Sobota was ready. But, when his name wasn’t called to be laid off, he found himself disappointment instead of relieved. He realized it was time to leave Transalta: “I decided to run with plan B. I finished my MBA at night and did Eleven Engineering full-time,” explains Sobota. “It started out as a consultancy, with projects ranging from satellites to a head tracker to help paraplegics use computers. We cut our teeth working on other people’s projects.”

They began to build chips, working primarily with RCA in their video game controls department. When RCA shut down their entire New Jersey and Chicago offices in the wake of the 9/11 incident, Sobota decided to focus solely on audio. By 2004, they were an audio chip company, and by 2006, the firm’s second XInC chip was launched, and partnerships with Bose and others took off. Thus the Steve Jobs-es– like journey unfolded as they spent over a decade and a half, in Sobota’s words; “<aniacally focused on creating an incredible product.”

Handshake deal with University of Alberta

The Eleven Engineering team has a total of 18 staff, with satellite offices in China, Taiwan, and the US. Sobota spends almost half his time in China, working to integrate his group’s designs into products and ensuring that the China team is supported so that production goes as expected. They also benefit from their proximity to one of Canada’s largest computer engineering programs at the University of Alberta.

“The handshake partnership that we have with the University of Alberta… gifts us with the best students that they train,’ says Sobota. Eleven Engineering is heavily involved in the University’s Capstone projects where students build something with everything they have learned, which, as Sobota explains, is much more challenging than building something on paper.

“It separates the real engineers from the pretenders. We act as a client for these courses, and we’re invited to the final presentations and we give our ratings on all groups, whether they used our chips or not,” he says.

Eleven is facing challenges though, in particular, in getting the big audio companies to jump on board with a new standard like SKAA. 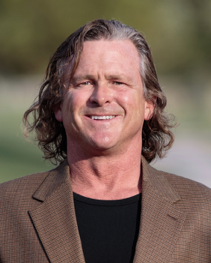 “The first hurdle is that new standard is typically a C-level (CEO, CTO, etc.) decision so it is much more difficult that simply an engineering manager choosing a current flavor of Bluetooth chip,” Sobota explains. “An engineering manager may base a decision on cost or familiarity but to adopt a new standard like SKAA, the decision must be elevated to C-level as this decision can redirect an entire brand’s product vision and marketing.”

Japan now followers in the industry

Whitehead adds that in the last decade, Japanese manufacturers like Sony and Panasonic, which used to lead the market, have now become followers in the industry.

“Unfortunately in the past decade or so, these Japanese manufacturers have been afraid to put a foot forward. One of the ways I can show this is at the CEDIA expo, we asked several of the large brands’ product managers why they used one of the popular Wi-Fi based solutions and each time we got a deer in headlight look in response,” says Whitehead. “There was no technical reason for what they chose. Once a large Japanese company uses a particular solution, other Japanese companies just blindly follow, without knowing what they are following.”

In response, Eleven is bulking up. They have signed a formal co-marketing agreement with Infineon, an $8-billion semiconductor giant, and they are embracing a next generation amplifier technology called Meris.

Average age is likely below 30

Eleven is seeing younger, more agile companies jumping on board such as Soundboks, a company whose staff’s average age is likely below 30. Soundboks is using SKAA to broadcast massive, pro-level, battery powered sound through giant portable speakers.

“These young, new aggressive companies are looking at the technical merits, the advantage that SKAA offers, something that sets them apart. Not just another follower who is blindly chasing a technology without really knowing why they are doing it,” adds Whitehead.

When asked for a final parcel of advice for entrepreneurs, Sobota suggests that they should jump right in.

“It’s not easy to start something new. But if you have the desire to be an entrepreneur, and you have the fire for it, do it right out of school. That’s when you’ve got the most juice. You have the energy to handle it at that point better than any other point. And you’re better off to follow your dreams than to wait.”

To learn more about SKAA go to www.skaa.com or www.elevenengineering.com.