Driving the wires of automation

It’s not uncommon to hear new cars with advanced electronics referred to as ‘smartphones on wheels’ or ‘mobile data centers.’ Regardless of the analogy used, there’s no doubt that today’s increasingly connected vehicles are very different from the cars of yesterday, sharing more in common with a continuously connected device that’s just a fraction of its size: the mobile smartphone. 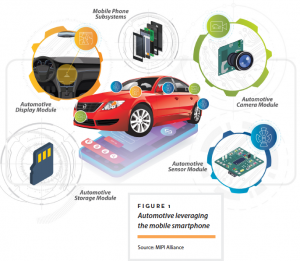 Consumers may see the use of mobile technologies in automotive in ‘visible’ features such as high-resolution front cluster displays connected to back-up rear cameras, infotainment displays with GPS navigation, and multi-wireless Bluetooth, Wi-Fi and 4G/5G cellular connections. This can be imagined in Figure 1 with the notion that many smartphone-like subsystems may be placed around the car to achieve this functionality

Greater convergence is happening behind the scenes

However, perhaps the greater convergence is happening behind the scenes in advanced electronics for Advanced Driver Assistance Systems (ADAS) and Automated Driving Systems (ADS) and the interconnects or interfaces that enable them to perform as a system, much as in the continued fast pace of technology integration that’s happened in the smartphone over the past decade.

This white paper provides an understanding of MIPI specifications for wired connectivity interfaces in automotive today, heavily leveraged from MIPI’s influence over the mobile smartphone ecosystems, and share how new enhancements and specifications are being developed with automotive applications in mind. In particular, it will provide an in-depth look at the upcoming MIPI A-PHY physical layer specification, which will provide a solution for the “long-reach, high-speed challenge” of connecting the highest speed electronic components throughout a vehicle. MIPI initiated development of A-PHY in 2017 to drive the convergence of multiple proprietary long-reach interfaces in automotive toward one standard with a strong roadmap vision for the future.

The auto industry is being transformed by several global trends, including a growing embrace of electric vehicles, increasing vehicle automation, tighter safety and fuel economy standards, and new ownership models such as car sharing.

These are all generally requiring that cars become smarter, connected and more automated, which means additional electronics. As vehicles progress along the Society of Automotive Engineers (SAE) levels of driving automation, they will be enabled by increasingly sophisticated sensor electronics and processing, brought together by high-speed interconnects. 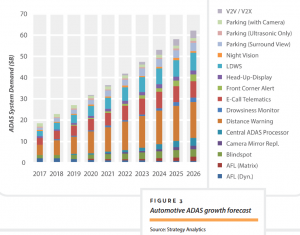 The sensors driving automation can be broken down into four specific types, each generating data at extremely high rates: optical cameras at rates of 12Gbps and rising, radio-based radars at 5Gbps, light-based lidar sensors at 1 to 2Gbps, and ultrasonic sensors in the range of 25 to 150 Mbps. Data from each sensor is delivered to the one or more “central” processors or electronic control units (ECUs) by a high-speed interface, often a dedicated one.

A key automotive sensor is the optical camera, which leverages technologies from the billions of cameras developed for the smartphone market. A look at the automotive camera market reveals this explosive growth on the early roads to automation. As shown in Figure 2, studies predict the automotive camera market will grow to $7.5 billion in annual revenue by 2023, with compound annual growth of 24.3% from 2018 to 2023.Taking the view out further, annual revenue for all ADAS technologies is predicted to reach more than $65 billion by 2026.

In this rapidly evolving landscape, while the existing broadly embraced automotive interfaces such as LIN and CAN see continued use for lower-speed (mainly control applications), auto manufacturers and suppliers have no clear standardized solutions for high-speed interfaces between cameras and ECUs, and for the most part they have had to rely on proprietary solutions. While these solutions may employ good technology themselves, the many competing solutions cause confusion in the marketplace, and the lack of a single standard limits economies of scale. In mid-2015, MIPI Alliance identified the need for a unified in-vehicle connectivity specification that would meet the automotive industry’s need for high speed, low latency, functional safety, light weight, low power consumption and the desired economies of scale. Since that time, MIPI has been working with automotive OEMs to define the requirements and understand the challenges of the noise channel. In the last two years, MIPI has produced several incremental versions of its Automotive Requirements Document (ARD).

This article was created from a white paper produced by MIPI Alliance: Driving the Wires of Automotive – MIPI specifications in automotive and the A-PHY solution.  https://mipi.org/mipi-white-paper-driving-wires-automotive.