A self-driving motorbike would deprive its user of the joys of riding, so Damon is taking a staged approach in developing advanced driver assistance systems, using connectivity and AI 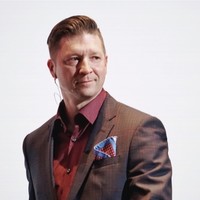 In the summer of 2016, serial entrepreneur Jay Giraud took a hiatus from start-up life to spend some personal time on his motorbike. While riding in places such as Jakarta, Indonesia, he became increasingly frustrated with the daily experience of being cut off – in part due to blind spots and lack of situational awareness that low-tech motorbikes provide. Overrun by motorcycles and heavy congestion, Jakarta provides motorists constant exposure to life-threatening circumstances, which led Giraud on the path to start Damon Motorcycles. His goal – to revolutionize motorcycle safety.

Prior to Damon, Giraud founded moj.io, now valued at more than $200 million in just five years. He had the help of co-founder Dom Kwong, who was also responsible for the technology at Recon, a start-up that was sold to Intel for $145-million. They discovered that 160-million motorcycles are sold globally each year. They incubated with Yamaha motors and have since grown their team to include 14 R&D personnel and a CFO.

Born at the intersection where the joy of riding is constantly threatened by a lack of safety, Giraud understood how badly the world needs safer motorcycles.

“No one is solving motorcycle-related problems,” he says. “But, to hit the nail on the head, I learned that motorcycling is 36X more life-threatening than driving a car, killing well over 3,000 people each day. This is what got me serious about the space.”

Cars now feature sensors, collision avoidance and self-driving capabilities. A self-driving motorbike would deprive its user of the joys of riding, so Damon is taking a staged approach in developing advanced driver assistance systems, using connectivity and AI.

Haptic language vibrates the handlebars to warn of impending threats

The technology is also dynamic and evolving.  The more users ride, the smarter and more predictive the program will become: similar to how Tesla cars are becoming smarter through bi-weekly updates. Among other patented features, Damon has developed a patent-pending haptic language that vibrates the handlebars to warn the rider of impending threats.

“The greatest challenge Damon faces, and its one that each of my other start-ups has had to overcome, is educating stakeholders about our opportunity. In Damon’s case, people pass over the idea that motorcycles are an interesting area for tech pretty quickly,” says Giraud. “To the North American market, with our newer cities and wide roads, motorcycles might seem like a niche market.”

Damon knows that this couldn’t be farther from the truth. Most mega-cities in the old world are thousands of years old. Roads are narrow, congested and populated with over 70,000 people per square mile, which is significantly more than we are accustomed to in North America. Cars are just too big in many of those markets, which makes motorcycles a critical component in the daily lives of over 1.5 billion commuters. 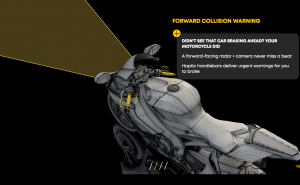 “In my 15 years doing start-ups, I have to say that the unobvious, hard-to-believe tech opportunities tend to be the ones that succeed. However, it takes a lot of outbound education, soap-boxing and relentless thought leadership efforts to get past the inertia that unbelievable ideas often face. It’s a lot like pushing a rope,” Giraud explains.

Over the next six months Giraud aims to build on his firm’s existing success.

“We’re looking for great tech talent. We want people with passion and energy who love to be part of a family, which comes before great skills or education. Damon is a full stack tech company assimilating sensors, AI, Cloud computing, smartphones, user experience and motion into a symphony for everyday riders, so knock on our door and introduce yourself,” he adds. “Everyone who believes in our cause and our team can be part of the social and financial benefits we’re creating for the world. We look forward to creating a big passionate family who wants to safeguard the freedom of motorcycling.”

Damon recently brought on Steven Lee as CFO and Erik Buell as a designer. Lee was key to the financial success of Slack and Mobify’s early days, two very successful Canadian companies worth billions today. Buell built 160,000 Buell motorcycles with Harley Davidson in the 80’s and 90’s, some of the most iconic and distinctively improved ‘bikes’ the world has seen, according to Giraud.