A guide to self-clinching fasteners for custom enclosures

For mounting components and other electronics, self-clinching fasteners are the way to go

For custom enclosures or parts, self-clinching fasteners can be a designer’s best friend. They solve a whole host of challenges when it comes to mounting components, and because of their compact design and low profile, they are a win aesthetically, too. 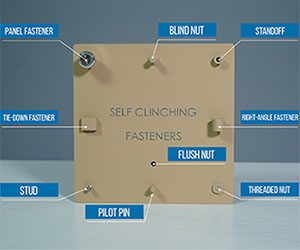 This post will provide an overview of the key self-clinching fasteners we stock at Protocase, and how they are useful in sheet-metal fabrication. As well, this guide will examine the key differences between flush-head fasteners and concealed-head fasteners.

Panel fastener: A panel fastener is a toolless device installed on the outside of the mounting part. It has a threaded stud on a spring that allows you to push and fasten into a threaded receptacle. When disengaged from its main nut, panel fasteners remain fixed to the panel itself.

Tie-down fastener: Also known as a tie-mount fastener, this type of fastener can give you a point inside your enclosure to neatly organize and tie up any kind of loose wiring or cables.

Stud: A stud gives you a permanently threaded screw inside your enclosure that can be used for many different purposes, including mounting or grounding components.

Pilot pin: A pilot pin is a simple unthreaded rod that can be used for such applications as locating components inside your enclosure.

Threaded nut: A threaded nut can be used for mounting parts or components together.

Standoff: A standoff is a fastener that is used to create space between two objects, usually to properly position them in a given space. A standoff gives you an internal thread which can be used to mount things like motherboards or PCBs.

Blind nut: Also known as a rivet nut, a blind nut gives you an internal thread, which is encapsulated. Blind nuts are typically used to prevent any foreign material from entering inside of enclosure.

Flush nut: This type of fastener can be used to create a mounting point which is flush on both sides of your part. 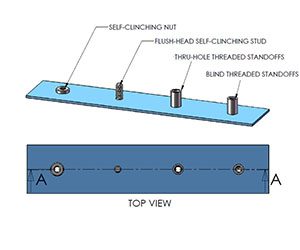 Self-clinching studs and standoffs can either be flush head or concealed head. Essentially, both flush- head and concealed-head fasteners achieve the same function. However, there are some key defining characteristics that make each of these fastener types unique from each other.

Flush-head fasteners are mechanically pressed through a hole in the sheet metal from the outside, so they sit mostly flush with the outside edge. There is a slight indentation around the exterior of the metal from where it gets pressed in that makes them detectable.

This slight indentation can be minimized by having the metal grinded down so the fastener sits more flush with the host material, and can be made even less noticeable if a textured powdercoat is applied. When using both these methods, flush-head fasteners are minimally noticeable. However, they can still be felt by touch.

Instead of having the fastener pushed through the metal such as with flush-head, concealed-head fasteners are inserted into a machined blind pocket so that there is no contact with the outside edge. The pockets can be created with either a CNC mill or router.

One important design tip: If you are choosing concealed-head fasteners for your design, you will need to make sure you use a thick enough gauge of sheet metal. This will ensure the CNC mill or router will have enough room to be able to machine the hole deeply enough into the metal for creating the pocket in which the fastener will sit. Click here to view minimum thicknesses on our website.

If you require an airtight or watertight enclosure, concealed-head fasteners are a better option.

Protocase makes it easier than ever for electrical engineers to design, price and build custom electronic enclosures and parts, built in 2-3 days with no minimum order. If you have a project that requires custom-manufactured parts and enclosures, view our website to get started.