Samtec Inc., a global leader in the electronic interconnect industry, participated in the process of restoring the Apollo Guidance Computer (AGC), to commemorate the 50th anniversary of the Apollo 11 landing.

If you’re like me, you’ve watched and read about the 50th anniversary of the Apollo 11 lunar landing. The achievement is all the more remarkable considering the archaic technology that got us there and back. 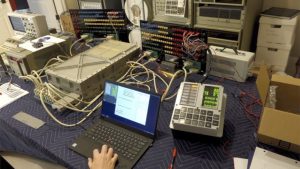 For me, this story began with an email last Fall from my co-worker Marc Verdiell, the chief technology officer of the Samtec Optical Group in Santa Clara CA. In his spare-time he is part of a small group that restores vintage computers. We both have an appreciation for history and Verdiell told me about a new project he was working on.

That job was to restore an even rarer computer, the Apollo Guidance Computer (AGC), in time for the 50th anniversary of the Apollo 11 moon landing. The AGC is the computer that navigated Apollo spacecraft to the moon and back, including the landing and ascent of the Lunar Modules to the moon’s surface. Both the Command Module and the Lunar Module had their own computer.

It turns out one of the bigger challenges in getting the AGC to work was the restoration of the connectors. Verdiell and I both work at Samtec and he asked if we could design, build, and donate replacement connectors for the AGC. This is tricky because the connectors that needed to be replaced were 1960-era products and are no longer available. Further complicating matters was Samtec opened its doors in 1976 and never made these types of connectors. However, Verdiell had copies of the original prints and we got to work.

This story really began in 1976, when Jimmie Loocke, a former technician at the NASA Manned Spacecraft Center (now Johnson Space Center), was looking for budget electronic components at a recycler’s warehouse. Included in this purchase was the rare AGC. Realizing the AGC was in good-enough condition to be restored, further industry recruits were added including Mike Steward, Carl Claunch and Ken Shirriff.

The restoration team gathered in a Houston hotel suite for two weeks, along with bunch of expensive and sensitive electronic diagnostic equipment. Fortunately, industry colleague Stewart already had the complete schematics of the AGC because he had spent several years researching and building a faithful replica of the computer.

The AGC had a modular design because NASA didn’t trust the reliability of computers at the beginning of the program. This led to the lunar module being equipped with a full set of extra modules that the astronauts could exchange in flight. Although the in-flight repair requirement was later dropped and the computer never failed, the original modular design remained.

Our team first removed the A modules and tested each one. As you can imagine, this was incredibly detailed, painstakingly slow work. They connected each module to their ‘mobile test bench’ and tested every gate to make sure it worked. After one week of testing, they were surprised to determine that all A modules appeared to work and were safe to power up.

When powered, the logic modules worked well enough that the computer went through the first instructions of its boot sequence. It did not go very far into the sequence since it still lacked Tray B memory, but the fact that it did so was greatly encouraging. 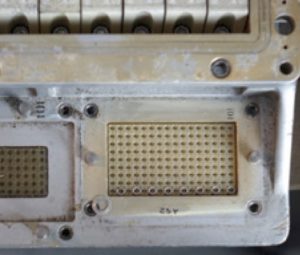 Samtec designers had to deal with restoring a damaged original connector.

It is extremely unusual that a computer of this age would try to boot on its first attempt without a month of debug and countless repairs. For example, the 1960’s IBM 1401, which the team had previously restored, had 200 faults. Similarly, the 1970’s era Xerox Alto took nine months of effort to boot. The team was flabbergasted that they could have literally skipped all of the testing and could have just powered up the AGC Tray A, and it would have worked. This was a testament to the quality of its design and workmanship.

For example, the system voltage reference source was specified at 5 volts. When powered, the system came to 4.99 +/- 0.01 volts. Think about that: this is 50+ year-old equipment which had been in storage for decades, and it was running within 0.20% of the original specification. For that matter, the system had two power supplies and they both came online perfectly regulated to full load.

On the final day of their two-week exploratory visit to Houston, about 20 minutes before they were to return to the airport, Mike succeeded in connecting an FPGA memory simulator that he had engineered on the spot into the computer backplane. The original Apollo 11 program was loaded and the AGC ran 2,000 instructions. This was another huge success, which greatly encouraged the team. Verdielli said later this was one event that convinced them they would be able to fully restore the AGC.

Next up was the memory modules, which proved more challenging. Verdiell took the core memory module with him for more analysis. Fortunately, they located and repaired a break in one of three potted modules

The module was brought to Samtec to be inspected with their sophisticated X-Ray/CT equipment. Scans revealed that the break was not close to the module pins, which unfortunately would be the only location where there would be a chance for repair. Time Domain Reflectometry and Frequency Domain Analysis later performed in Verdielli’s own lab confirmed that the break was located deep inside the core stack and buried in the potting, in an unreachable location.

Plans for a direct repair were abandoned. Fortunately, for extra reliability, the memory was designed with an extra bit in the form of a parity bit, used solely for error detection. It was decided to reuse the parity bit to replace the faulty bit and disable parity checking. This would require (reversible) changes in the AGC wire-wrapped backplane, a delicate operation for sure, but not impossible. Also, the analog modules supporting the memory sections were much more difficult to test. The next steps had to be performed in a properly equipped lab. 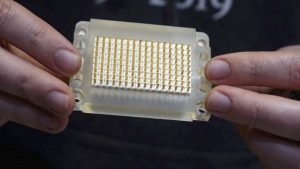 The team began exploring with Loocke the possibility of bringing the entire AGC to Verdiell’s lab in California to complete its restoration. When the team arrived it discovered three more faults in another potted memory system module. Fortunately, they were able to repair them all. They were also able to repair the read-only rope memory system that contains the programs. The rope memory system on this AGC was a ground test model, also built by Raytheon, but not to the same standards as the space-rated AGC. It behaved much closer to what you’d expect from a computer of this age: it had dozens of faults, many of them intermittent, sprinkled throughout and kept the team entertained for days. Eventually, after all of the modules were repaired and installed in the AGC, it passed all logic and memory tests.

Finally, they began running the original computer programs, the most interesting being P63, the iconic program that controlled the Apollo 11 lunar module (‘Eagle’) descent for the actual moon landing. The P63 computerized flight control was essential to a successful lunar landing. NASA had deemed impossible for humans to fly the landing given the barely sufficient amount of fuel allocated. Although Neil Armstrong famously assumed manual control of the ship for the few last minutes of the landing to avoid a rock field, Eagle successfully landed with 24 seconds of fuel left in the tank, mostly thanks to the AGC.

The AGC’s data output and monitors were nothing like the video games of today. The restoration team, just like the original Apollo astronauts, were looking at a small screen with a black background and green block letters, known as the Display-Keyboard interface, DSKY for short. As they couldn’t get any of the major museums to lend them a real one to restore, the team built their own DSKY replica. As Marc later said, “They also had two stick controls. This and the obtuse DSKY makes for an extraordinarily entertaining video game!” 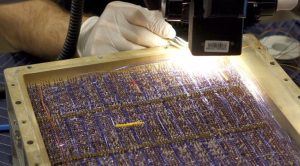 At the end of our last conversation, I asked Marc why he did all of this. I assumed his answer would be something like he did it because the lunar landing is arguably one of the greatest human achievements of all mankind, or because it is living history.

But, his first response was “because it was fun.” He later acknowledged the historical significance, but then he added, “You can’t top this one. This is where computers went from the size of an entire room to their current size. It’s the first computer used to fly a machine, let alone to fly one into space. It’s obvious it was made by an A+ team. When you restore it, you feel like you’re there in the 1960’s again. You get to relive Apollo; that’s priceless.”