A prime example of the importance of corrosion protection is the reaction of customers to simple discoloration on OEM electronic components. Customers are very sensitive to product abnormalities that increase the risk of corrosion and component failure down the road.

After more than 20 years in the electronics industry, Jay Zhang, who now provides corrosion solutions as technical sales manager at Cortec Corporation, knows from experience how customers can be disturbed by discoloration on circuit boards received. “I often see the customers and the suppliers debate or argue what level of discoloration is acceptable and what’s causing that and what actually is the material on the surface of the metal that shows a different color,” said Zhang. He explained that discoloration theoretically comes from foreign material (sometimes only moisture that has dried on the metal surface), which may or may not eventually cause the basic metal of the circuit board to deteriorate. Zhang said this will depend on the chemical composition of the foreign material and the ultimate environment in which the component will be placed.

Regardless of the final result, the frequent debate over discoloration alone makes one thing clear: avoiding corrosion is a customer priority that will help OEMs avoid tense discussions and strained relationships with clients.

Another reason to prevent corrosion is simply to avoid material waste. Zhang also noted that freshly etched copper PCBs are especially vulnerable to corrosion and need to be re-etched if they oxidize. Re-etching can only be done so many times until the copper is no longer thick enough to meet PCB requirements and must be scrapped. This wastes valuable materials and production time.

A third reason for corrosion protection is found in the production equipment itself. Certain areas of electronics production, such as wet process rooms, produce especially corrosive environments. Corroded equipment electricals and electronic controls result in more repairs, more downtime, and shortened service life. A smaller investment in corrosion protection now can pay off in the future with long term savings from extended equipment service life and less downtime.

Advantages of VCI Technology for Electronics 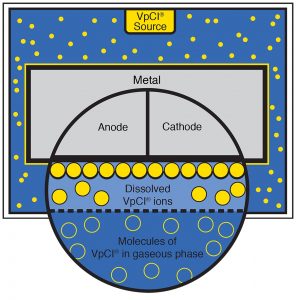 There are multiple ways to implement corrosion protection strategies at an electronics OEM. One intriguing technology with important properties for electronics components (particularly those that can be stored in an enclosed space) is VCI, or Volatile Corrosion Inhibitor, technology. VCI technology can be made from organic corrosion inhibitors that have a moderate to high vapor pressure. This vapor pressure allows VCI molecules to sublimate, or vaporize, from a source material (e.g., a powder) into the air. The VCI vapors spread out, naturally travelling toward areas of lower concentration according to Fick’s law of diffusion. When VCI molecules are placed inside an enclosed space, they eventually reach a level of equilibrium, at which point they are attracted to metal surfaces inside the space. They condense there and form an invisible layer of protection on the metal surfaces. The layer is hydrophobic and protects the surface of the metal from interacting with corrosive elements such as moisture and chlorides.

VCI molecules are so small that they do not interfere with the performance of electronics. Additionally, the same vapor pressure that allows VCIs to fill an enclosed space and form a protective molecular layer on the surfaces allows the VCI protective layer to naturally leave the metal surfaces after the molecules are no longer trapped in an enclosed space. This makes protection both clean and dry without the need for a special coating.

Another advantage of VCI over traditional electronics protection is its ability to travel through the air by vapor pressure and form a protective layer in the small crevasses and contours of intricate electronics, protecting spaces that might be easily missed when using a traditional coating. VCI can also enhance the performance of electronics and electricals by reducing the buildup of corrosion products and reducing electronic noise.

VCI technology is available in many practical forms to adapt to different OEM situations and budgets. An especially important form is VCI packaging materials for use in temporary storage or shipment. 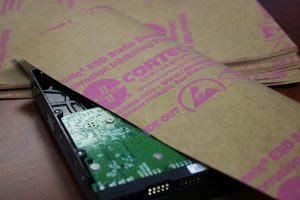 An example of how VCI packaging can be used during the manufacturing process is the temporary storage of PCBs. Often, freshly etched PCBs must sit overnight or longer before moving to the next stage in the manufacturing process. During this time the PCBs can be layered with VCI coated paper between the boards to protect against copper oxidation. Other partially finished electronic components can also be interleaved with VCI paper as they are stacked in work bins to await additional work and transport from work station to work station. VCI paper can be combined with ESD properties to protect sensitive components from static discharge.

During shipment, fluctuating temperatures and humidity can cause moisture buildup, one of the main causes of concern for corrosion inside packaged electronics. This is commonly addressed by adding desiccant to the package to absorb the moisture. However, depending on the shipping environment, this is not always sufficient. VCI provides an added safeguard against goods being returned with corrosion claims. This extra protection can be easily added by throwing pouches of VCI combined with desiccant into an electronics package, or by wrapping the entire electronic in VCI paper or film with ESD protection. 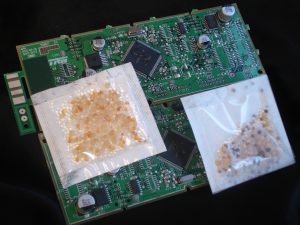 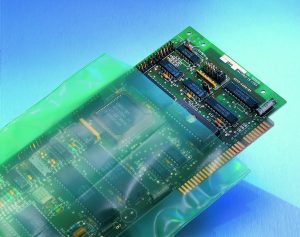 VCI technology can also be a very useful strategy for electrical boxes and controls anywhere in an OEM plant, but especially for controls located in highly corrosive environments like the wet process room. VCI emitters work in the standard VCI fashion when placed inside a control box: VCI molecules diffuse and form an invisible protective layer on metal components. A very thin coating that contains VCI and also provides protection through direct contact with the coating can also be sprayed on control panels. Protecting electronic and electrical controls in these ways will reduce maintenance costs and downtime by decreasing the frequency of failure and the need to replace electrical contacts, switches, and relays. 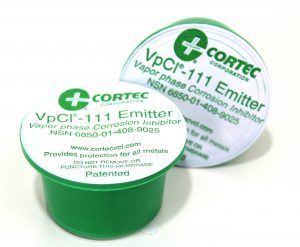 Corrosion protection is an important strategy for electronic OEMs in terms of fostering good customer relationships, avoiding raw material waste, and extending equipment service life. VCI technology has a unique compatibility with electronics due to its small particle size and its invisible layer of protection that does not need to be manually cleaned off the surface before component use. It adds an extra measure of safety for electronic goods in temporary in-process storage or shipment. It is also a practical consideration for electrical and electronic controls supporting the electronics manufacturing process, helping to provide smoother services and extend the service life of assets.

*Acknowledgements to Jay Zhang, Cortec Corp., for his insights into the EMS industry.