What are the biggest pitfalls when designing power systems?

Today, engineers are asked to find creative solutions to deliver more power from less space and with higher efficiencies. This makes power-system design an increasingly important part of developing technologically-advanced electronic equipment. Research by Vicor found that these engineers are facing a myriad of challenges meeting cost and schedule targets.

The research found that power-system developers around the globe perceive the biggest challenge to be changes in specifications for the power system during development. Although it may be surprising that this was the biggest problem, rather than technical challenges associated with meeting the system’s requirements, in fact changing specifications make it even harder to deliver a project on time and on budget.

The following graph summarizes the responses given when power designers were asked to identify their biggest challenges.

Changing specs is the top problem

Changes to specifications during development was the biggest issue that power-system designers surveyed must overcome, with almost all (87%) struggling to deal with this challenge. Changes in specifications mean project delays and increased cost due to the additional work required to modify the design to meet the new requirements.

It’s clear that these changes do have a major impact on projects, as most of those surveyed (65%) said that changes to product specification are a major contributor to delays in power-system development. Although two thirds of power engineers already see the negative impact of changes on their projects, the problem is likely to get worse as the majority (67%) believed that changes were becoming more common. 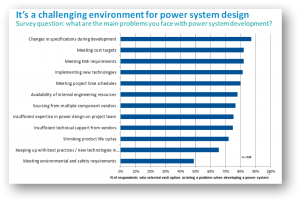 The impact of these changes can be dramatic. Almost all (80%) engineers surveyed are struggling to meet project time scales, with a similar number (79%) seeing the time given to each project reducing, and three quarters (72%) having to increase the rate of innovation due to shorter product life cycles. The changes to specifications can only increase the time pressure.

Delayed projects can have a large financial impact. To put it into perspective, take an example of an application that an OEM╒s business projections show as starting to pay back within two years of the new system’s five-year product life. The project development in this example takes eight months. If there is even just a two-month delay, the return could reduce by as much as 20%. For a development of $1M the loss of contribution could exceed $350K when one takes into account the reduced product life, as well as the increase in associated development costs. Additionally, these costs would typically be passed to the customer, reducing competitiveness. 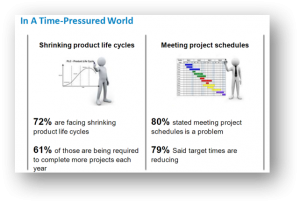 With half (48%) of our respondents experiencing delays of two months or more, it’s clear that reducing or eliminating overruns would result in a significant improvement to profitability.

The impact can also be personal, eroding the morale and confidence of engineers who struggle to chase the moving specification goalposts. In our experience, it’s likely that specification changes are a factor causing power developers to, on average, rate their power expertise as only 59/100, especially when three quarters of them say they have insufficient in-house expertise to manage the changes.

As the survey findings highlight, changes to specifications are pretty much inevitable for most engineers (87% of our respondents said this was a problem). In our experience, changes are most frequently driven by technical issues, particularly when the exact power budget is not known at the start of the project, loads are changed or restrictions are placed on thermal management due to space restrictions. External market or competitive forces can also cause a change to specifications because: customer demands change; there are changes (or will be changes) to the legislative landscape; or a competitor launches a new product. All of these factors may cause an organization to re-evaluate what the market now needs.

The impact of these changes will vary, depending on the length of product life cycle, market leadership and other internal market forces and levels of risk. But what’s important to note in the context of this survey is that engineers have little or no control over what is happening, they can only look to find ways to ameliorate their impact. Whatever the causes, we meet with an increasing number of power developers who are having to deal with the specification changing after they have begun designing.

If changes to specifications are inevitable, then there is little point in trying to avoid them: power system designers should instead look at strategies that mitigate the impact of changes.

An inflexible approach to power design will make it harder to deal with changes in specifications. This is particularly the case when a custom power system is developed using discrete components or purchased from a vendor. In this case, any changes to the inputs or outputs requires complex and time‑consuming redesign work. At worst, discrete designs might need a different technology to meet the new requirements.

Engineers typically use online tools when implementing the Power Component Design Methodology. The Vicor PowerBench offers a suite of free tools that not only allow systems to be designed and optimized quickly and easily, but also allow for revisions to meet new specifications quickly and easily.

Changes to specifications after development has started is the biggest challenge for power-system designers and the problem is getting worse. Conventional approaches to power system design using discrete components were developed when specifications were less fluid and their lack of flexibility makes adapting to the inevitable changes difficult, time-consuming and expensive.

Using modular power components offers several benefits, particularly the flexibility to make modifications to power systems quickly and easily, making it far more effective in today’s unpredictable design environment. Switching to this new approach may not stop power engineers’ bosses changing their mind, but will reduce the stress and cost of the new requirements.

Methodology can help with design