Since early telescopes, we have seen various lens designs that aid users in viewing distant objects, though they all suffer from fundamental weaknesses. These models use curved lenses that have size limitations and are also prone to aberrations. Vancouver-based NexOptic Technology Corp. hopes to change that. As a creative optical development company, the firm aims to revolutionize lenses by improving how we capture digital media. Their overarching goal is to produce lenses capable of superb definition and clarity in a smaller housing.

For instance, a flat lens system they designed gathers about 27 percent more light than a comparably sized curved aperture lens with squared corners. More importantly, NexOptic designs increase the aperture to-depth ratio in devices that currently exhibit depth limitations. Their lens sizes can be miniaturized by several factors thus opening the door to a multitude of applications ranging from space telescopes to handheld phones.

West Tech Report recently had the opportunity to speak with Paul McKenzie, president and chief business officer (CBO) of NexOptic Technology Corp. A serial entrepreneur, Paul has made significant resource discoveries worldwide and has overseen and negotiated joint-venture and alliance partnerships with companies whose market-capitalizations have exceeded $20 billion. 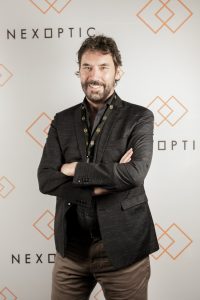 An Alberta/BC based company focused on developing new products with far-reaching potential, NexOptic came together as the two original founders were in Alberta and McKenzie was as in Vancouver, together they made the company a reality.

“I met the founders four years ago. They were at a conceptual stage at the time, and even though the technology was new to me, I could tell that there was something significant going on,” says McKenzie. “They came from strong backgrounds themselves. One engineer has an MBA, another has a business degree. They have built and managed companies in the past.”

This is significant, but this was not the main reason that led Paul to support NexOptic.

“It was how meticulously they explained their ideas and how they wanted to move forward and their passion for their idea that really resonated with me, he adds.”

NexOptic has benefited from government support out of the province of Alberta through the ACAMP and Alberta Innovates programs, which helped to incubate and fast track their efforts. They earned $50,000 through a grant from the National Research Council (NRC-IRAP), but it was more about the symbolism behind it that helped NexOptic, explains McKenzie.

“We were one of the few [grant recipients] out of many applicants, giving us a strong endorsement as to who we are and what we’re doing. Because they went rather forensic in their due diligence of us, the process and award gave our shareholders increased confidence in us,” McKenzie says.

A few years back NexOptic was inspired by iPhones that began delivering dual camera systems, which improved low light and distance photography issues.

“We are expecting our technology will provide a more substantive shift to see farther with higher resolution, as well as produce crisper photographs in low light,” says McKenzie. “When we try to take pictures at a dimly-lit dinner party, or a sunset, we struggle due to the amount of light the smartphone can take in. Our solution will be a leap forward for the industry.”

If successful, NexOptic will change the camera industry. For instance, their product allows the viewer to see much further – compared to conventional binoculars.

“We would bring into the digital age an enhanced shareability and viewability. You are going to be able to see it on a screen, share the experience with anyone beside you, record it, image it… basically binoculars on steroids,” explains McKenzie.

For the mobile device space, users can expect cheaper, more precise photographs, paving the way for extended zoom lenses on traditional smartphones with increased resolution. OEMs and engineers may note that while smartphones are the most imminent opportunity, these applications are just the beginning for this technology.

“My advice to the budding entrepreneur is – it really is about passion. Passion combined with capital allows a company to launch. If you have passion and no money, and you are determined enough, then you will find your way. But, if your passion slowly gets diluted, then it just means that your determination was not strong enough,” McKenzie says.

NexOptic is working toward a line of sports optics, after which they will target the smartphone industry. For more information, go to nexoptic.com.