11 Myths about the MicroTCA backplane-based architecture

1. MicroTCA is just a communications-based architecture.

The name MicroTCA can be misleading. Although TCA stands for Telecom Computing Architecture, most new applications are outside of telecom. They range from high-end industrial, military, and aerospace to lab/research and physics applications, among others. Some of the more interesting ones include an advanced money-counting system, NASA Space Ground Segment Sustainment project, naval towed array, mobile ground radar vehicle, fixed ground radar, and the x-ray free-electron (XFEL) laser.

2. MicroTCA doesn’t have any competitive advantages over VPX.

Now that OpenVPX offers system management (which leverages the MicroTCA/AdvancedTCA Hardware Platform Management specification), some think the technology playing field is even. First let’s look at SWaP (size, weight and power), which is critical in many mil/aero, physics, radar, and other applications. MicroTCA can fit in a much more compact space, where it’s impossible for VPX to fit.  With common horizontal-mount configurations, up to 12 advanced mezzanine cards (AMCs) can fit in a 1U chassis (with modules plugging in the front and rear). Figure 1 shows an example of a modular 1U horizontal-mount MicroTCA chassis offering a wide mix of MicroTCA carrier hub (MCH) and AMC sizes and power-module options.

FIG. 1: With horizontal-mount plugging in a 1U size, several AMCs can be utilized, as is the case with this modular PCIe Gen3 chassis from Pixus Technologies.

Most OpenVPX systems are semi-custom, as a backplane needs to be designed to meet the routing configurations and slot sizes. MicroTCA offers flexibility, but also specific pinouts for the fat pipes of data, making interoperability easier.  In MTCA systems with an integrated MCH, the price is almost always better (with a pluggable MCH it’s usually better as well). Finally, advanced clocking options, JTAG switch modules, chassis locators, and other features are defined in the specification.

3. MicroTCA is not rugged.

There are multiple styles of ruggedized conduction-cooled MicroTCA systems. This includes air-transport-rack (ATR) style designs with clamshells around the modules (MicroTCA.3), a light-rugged version with a locking mechanism to secure the handles (MicroTCA.1), as well as purpose-built designs. The connector for MicroTCA went through the same testing as the OpenVPX connector—and at the same lab (and passed).  As described in Myth #1, the architecture is well-proven in defense and space applications.

4. The solutions for MicroTCA aren’t interoperable.

In the very early days of MicroTCA in 2005, there was a large rush-to-market by various vendors, even before the spec was ratified.  The use of the MCH, which acts as both a switch and a shelf manager, was a new concept to a lot of vendors. Non-compliant products rushed out the doors at some companies, causing issues with a few significant early adopters.  Now into its 11th year, the architecture has gained maturity. There are also interoperability workshops held by key vendors, typically once per year.

5. You can’t have rear transition modules with MicroTCA.

The MicroTCA.4 specification offers RTM modules; however, it’s in the double-module format (150 ? 180 mm) rather than the typical single module format (75 ? 180 mm). These types of chassis have been deployed many in physics, transportation, and military applications.  With the common use of midplanes, I/O modules can also be plugged in the rear of the enclosure.

The MCH does add cost, but as mentioned earlier, some vendors have integrated it into the chassis to reduce the price. Still, it’s typically apples-to-apples less than OpenVPX. This might be called an AMC chassis versus a MicroTCA chassis. PICMGmembers are also considering a “MicroTCA Lite” with just basic monitoring features. Furthermore, there are some simpler point-to-point designs without an MCH.  If backplane routing is used from slot to slot (like a lot of VPX systems), each board can turn on autonomously without an MCH present.

There are 40-GbE versions of MicroTCA in the market today.  However, it should be noted that the specification for this speed is still in draft.  A nice feature of MicroTCA is that defined options exist for Ethernet and PCIe signals. So, you can have PCIe Gen3 across a fat pipe (lanes 4-7) and 40 GbE across the extended fat pipe (lanes 8-11).

With the name of advanced mezzanine card (AMC), many people don’t associate it immediately to the pluggable module for MicroTCA. One vendor alone has over 350 AMCs in its offering, with multiple configurations of each therein. In fact, there’s a much larger I/O and CPU/NPU/GPU offering in AMC form factor versus VPX due to the fact that AMC cards are truly commercial off-the-shelf (COTS), used in defense, communications, test/measurement, transportation, physics, and other applications. For example, in the AMC form factor, you can find NPUs such as Tilera, Cavium, and high-end Intel and Freescale. 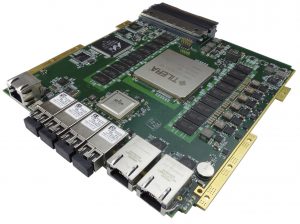 FIG. 2: By using a second connector ‘tongue’, additional I/O and power pins are available, as in this AMC from VadaTech.

Even in the single module size, there’s a 56 Gsample/s (yes, with a “G”) analog-to-digital converter with an UltraScale FPGA. Even more capability is available in the double-module size.

AMC modules have enough pins to support about 84 W. However, the specification allows for the use of a second tongue to be utilized.  This provides more I/O and higher power capability. Processors above 110 W are possible with the second tongue. AMC modules in the market do have high-power processors on them, such as an 8-core Intel E5-2648L. Figure 2 shows an example AMC with a second tongue.

MicroTCA has at least eight chassis platform manufacturers, a few full-system providers, and at least a couple of dozen AMC vendors. A vast range of standard and specialty AMCs are available for all types of applications from physics to communications to military to transportation and much more.