Metaverse has driven hype on augmented and virtual reality, but caused a PR problem

2022 was a turbulent year for Extended Reality (XR). The popularization of the metaverse concept raised massive interest in Augmented and Virtual Reality (AR/VR) devices as the gateway to this future vision of the internet, with excitement gathering over an expected revolution in how we communicate. Arguably “metaverse” became one of the words of the year.
However, as the year wore on, a problem became apparent. CEO of Apple, Tim Cook, stated in a recent interview with Bright magazine, “I’m really not sure the average person can tell you what the metaverse is“. Many investors cannot either and a sharp transition from hype to disillusionment is underway. 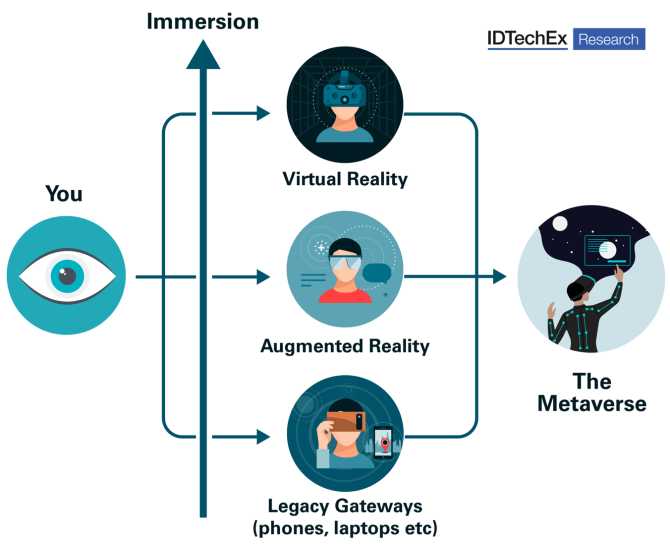 VR device development remains the key short-term focus of most of the XR industry, but AR devices are hoped to begin to supplant the smartphone over the next decade. Source: IDTechEx

The vision of an open 3D internet which seamlessly exists alongside the real world and allows participants to take their identities and avatars between different interoperable virtual spaces is poorly understood. Instead, media reports increasingly tend to classify the concept as any 3D open world, which somewhat undersells the idea: calling Roblox or Meta’s Horizon Worlds “the Metaverse” is like calling Google “the Internet”. When considering the development of this next iteration of the internet, it is important to look beyond opinions on any one company and assess the industry’s movement as a whole. 2022 has marked the earliest stages of massive collaboration toward getting the metaverse right.

Of course, uses of AR/VR devices extend far beyond being gateways to the metaverse. Tim Cook suggested in the same interview that a world without AR headsets could soon feel as alien as the world without smartphones today, adding fuel to speculation that smart glasses from the tech giant could be on their way soon. In 2022, Meta’s gaming-focused ‘Quest 2’ became the best-selling VR headset in history, surpassing ten million units sold.

Decade of false starts come to an end

Since the launch of Google’s Glass EE in 2013, consumer AR devices have often launched without presenting a use-case compelling enough to justify their high cost and dubious social acceptability. This led to several high-profile flops and headset manufacturers transitioning towards professional markets where success has been more readily available. In 2023, the era of this transition will come to an end. This is because greater attention on product-market fit, combined with increasing technological sophistication, is making success for consumer-focused smart glasses a possibility at last.

In 2022 Magic Leap, whose expensive first consumer-focused headset underperformed expectations, was the latest company to complete a pivot towards business users with the release of its well-received second device. The design of this second headset represents a wider industry trend towards increased simplicity and lighter weights, even for the highest-end devices. The second headset sheds a problematic multilayer diffractive waveguide setup, which allowed images to be projected at two focal distances but damaged light efficiency and image quality. This contributed towards a weight saving of 56g for the headset unit, which would significantly improve comfort for longer-term wear. 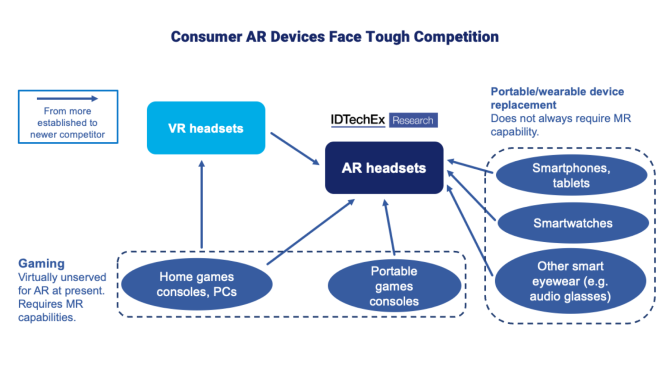 AR headsets have to compete with more established device categories, including VR headsets, in many areas. 2022 has shown early signs of headset manufacturers finding ways to break outside of this tough competitive position. Source: IDTechEx

This trend towards simplicity is even more evident in the emerging generation of AR headsets aimed at the public. These devices are not yet a viable replacement for the smartphone, so instead of making a complex headset which tries to do everything, why not make something relatively simple targeting a single high-value application?

The Tilt Five, which started shipping in 2022, might be the best example of this approach yet. It focuses on AR tabletop gaming and its optical setup, which uses a retroreflective board, avoiding the need for expensive optical combiners. As well as keeping prices down, this allows users to see each other’s eyes (which many optical combiners make difficult or impossible), keeping the all-important social aspect.

Reducing front light leakage from optical combiners will be a key challenge for the next generation of AR devices if manufacturers wish to push their unique ability to socialize with physically present people while interacting with computers. Not to mention bringing prices down to an acceptable level for the public. One possibility is a move to plastic substrates for optical waveguides.
Google, which has maintained success in enterprise AR after withdrawing Glass from consumers, showed perhaps the most compelling use of AR glasses to date as its prototype of smart glasses entered limited public trials. The headline feature is AI-driven, real-time transcription, and translation of speech in front of the wearer’s eyes, likely based on Google’s Tensor chips. No existing smart device type can fulfill this role without forcing you to take your eyes off the conversation or using distracting text-to-speech. This emphasizes the unique ability of AR devices to promote social connection with those around you. This is something developers of upcoming headsets would do well to bear in mind.

Aside from a refocus on application-forward approaches, the commercial launch of microLED displays in AR headsets is another key data point suggesting 2023 is the year consumer AR devices could begin to find a niche. These have the ability for highly increased efficiency and brightness. JadeBird Display, which vastly scaled up its manufacturing facilities this year, makes microLED for AR applications. They have a maximum brightness level of 3 million nits compared to the OLED-based displays used in many consumer AR devices to date. Alongside their potential for extremely low pixel pitches and small panel sizes, these factors help shrink the batteries needed for AR headsets. This leads to a more comfortable wear and a greater shot at producing good-looking designs that promote social acceptability.

Enterprise use of XR devices to grow

Meta’s October 2022 release of the US$1500 Quest Pro VR headset raised a lot of hype but also just as many questions. This enterprise-focused product represents a growing trend in the VR industry of emphasizing video passthrough mixed reality (MR). This is where images from cameras on the front of the headset intermesh with virtual objects. “Pancake” lenses, which use polarizers to shrink the optical path through the headset, help keep the headset compact and prevent video passthrough from feeling like your eyes are on stalks.

Meta wants this headset to transform a laptop into a multi-monitor setup that you can take anywhere, and its capabilities are impressive. The volume of conversations around the device conceals the wider emphasis on XR devices intended to fulfill similar applications.

Lenovo’s ThinkReality devices have history here, with its upcoming VRX headset sharing a similar feature set to the Quest Pro. However, its A3 AR headset takes a different approach to the same set of problems. This compact headset uses birdbath combiner optics to overlay images onto the real world, meaning no latency or image noise but that a smaller field of view can be covered with projected information. It does not offer as many advanced features as the Quest Pro and must be tethered to a phone or PC in use, but it weighs less than a fifth as much. A similar device for consumers, albeit with vastly reduced features, is expected to launch globally next year.

Despite growing interest in XR devices in the office (a prime example of this is Accenture’s use of 60,000 Meta Quest 2 headsets as part of its onboarding process this year), hardware barriers remain preventing headsets from becoming the workstation of choice. One such issue is the vergence-accommodation conflict. This is the mismatch between perceived distance and focal distance for virtual objects in a stereoscopic 3D display like a VR headset. This is one contributor to the eyestrain and motion sickness-like symptoms many experience when using VR, which is particularly important to solve if you want to use a headset for hours at a time.

For VR headsets, a solution of interest is geometric phase lenses, which use carefully subwavelength patterned designs in conjunction with switchable half waveplates (effectively large liquid crystal pixels) to produce a variable focal length lens with no moving parts based on switching the polarization state of light. Couple this with eye-tracking tech to work out where the user is looking, and these optical devices can be used to solve the vergence-accommodation conflict, matching perceived and actual focal distances. Meta publicly demonstrated a prototype lens for this purpose this year. While it will not find its way into headsets in 2023, look again in 2027 and deployment will likely be underway.

Overall, enterprise adoption of XR headsets is expected to keep growing next year, with an emerging wave of VR headsets emphasizing video passthrough AR being key drivers in this trend. However, do not expect them to be a replacement for your laptop just yet. 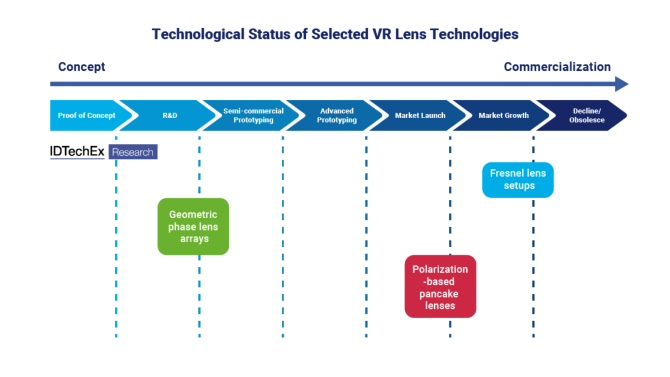 The most notable feature of the Quest Pro’s announcement was the collaboration between Meta and Microsoft to bring the latter’s productivity features onto the device. On the one hand, this forms another data point amongst many this year (including the loss of important personnel like HoloLens lead engineer Alex Kipman), suggesting that Microsoft is revaluating its HoloLens AR device program. On the other, it speaks to the true “unite or die” problem of creating an interoperable metaverse and is an early datapoint suggesting a growing trend in collaboration between major stakeholders.

2022 marked the formation of the Metaverse Standards Forum, which aims to advise international standards agencies on developing standards to support an open metaverse. Its members read like a who’s-who of the XR industry, as well as major internet, telecoms, and professional service firms. 2023 will almost certainly see the first implementation of conclusions from the group in shaping this nascent space.

Although Apple is a notable omission to the Forum’s list of members, ByteDance not appearing is possibly more interesting. The force behind major social media disruptor TikTok bought VR headset manufacturer Pico in August 2021 and, in late 2022, began targeting European consumers with its Pico 4 headset. This is an enterprise-focused headset that appears to be designed to compete directly with the Quest Pro due for release soon. Although yet to launch in the US market, this move, amongst others including the acquisition of several companies with metaverse interests, suggests this internet giant could be one to watch in the XR space in 2023 – tracks the movements of all the major players here.

Despite the impact of general global uncertainty and some loss of confidence in the metaverse, the data suggests that the future looks bright for XR. The hardware development mountain that prevents its full realization is slowly being climbed, with VR headsets becoming increasingly commonplace in the home and lightweight, good-looking AR glasses set to replace the smartphone. As this journey progresses, IDTechEx will be there to chart its progress and plot out its future course.

Click here to learn more about the IDTechEx report.