The company that assembles Apple Inc.’s iPhones has announced it is easing COVID-19 restrictions at its largest factory in China that led thousands of workers to quit and drastically slowed production.

Foxconn Technology Group said in a statement on one of its official WeChat social media accounts that it would end the so-called ‘closed loop’ system at the facility in Zhengzhou, central China, that required workers to say in their workplaces and dormitories to prevent the spread of coronavirus infections.

The move announced Wednesday came about a week after China began easing harsh COVID-19 curbs despite signs the number of infections is rising. 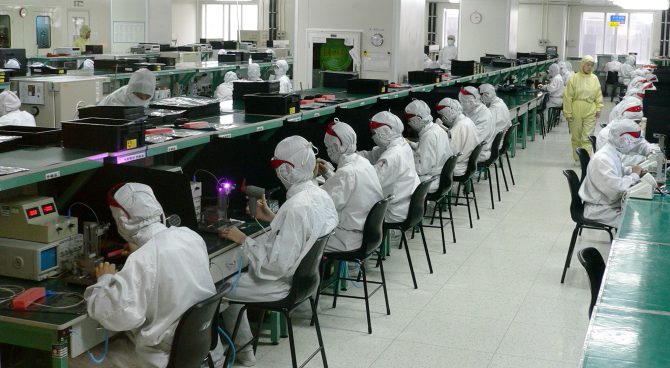 One of the production floors in Foxconn factory at Shenzhen. Source: By Steve Jurvetson from Menlo Park, USA – glue works. Uploaded by Zolo, CC BY 2.0, https://commons.wikimedia.org/w/index.php?curid=9968048

Following a spate of protests across the country last month many zero-COVID restrictions were lifted. That means people no longer need to take frequent COVID-19 tests to travel on public transport. If they do test positive for the virus, they can isolate at home if they have only mild or no symptoms instead of being sent to a quarantine centre.

Workers walked out at Zhengzhou factory

Thousands of workers at the huge factory in Zhengzhou walked out in late October over complaints of unsafe working conditions – such as food shortages due to closed cafeterias – and a virus outbreak at the plant.

The last quarter of the year is typically a busy season for companies like Foxconn as they ramp up production ahead of the end of year holiday rush. Apple has warned that iPhone 14 deliveries would be delayed due to manufacturing disruptions.

Foxconn, headquartered in New Taipei City, Taiwan, has been trying to rebuild its workforce after the massive walkout in late October. The company then ended up apologizing after a pay dispute triggered protests by workers who said Foxconn had changed the terms of wages offered to attract them to the factory.

In its announcement, the company said it would no longer provide free meals to workers because factory cafeterias would reopen. Instead, meal expenses will be deducted from employees’ wages as usual, though workers who must quarantine after testing positive for the virus will still get free meals.