Semiconductor manufacturers worldwide are forecast to expand 300mm fab capacity at a nearly 10% compound average growth rate (CAGR) from 2022 to 2025, reaching an all-time high of 9.2 million wafers per month (wpm), according to industry association SEMI. Strong demand for automotive semiconductors and new government funding and incentive programs in multiple regions are driving much of the growth, as detailed in SEMI’s report.

New fabs announced by companies including GlobalFoundries, Intel, Micron, Samsung, SkyWater Technology, TSMC and Texas Instruments are ramping in 2024 or 2025 to help meet the growth in demand.

“While shortages of some chips have eased and supply of others has remained tight, the semiconductor industry is laying the groundwork to meet longer-term demand for a broad range of emerging applications as it expands 300mm fab capacity,” said Ajit Manocha, SEMI president and CEO. “SEMI is currently tracking 67 new 300mm fabs or major additions of new lines expected to start construction from 2022 to 2025.” 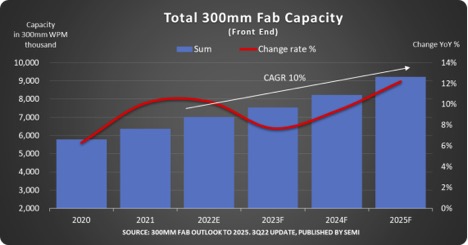 China is projected to increase its global share of 300mm front-end fab capacity from 19% in 2021 to 23% in 2025, reaching 2.3 million wpm, a rise driven by factors including growing government investments in the domestic chip industry. With the growth, China is nearing global leader Korea in 300mm fab capacity and expected to overtake Taiwan, now in second place, next year.

The Americas’ global share of 300mm fab capacity is forecast to rise from 8% in 2021 to 9% in 2025, driven partly by U.S. CHIPS Act funding and incentives. Europe/Mideast is projected to increase its capacity share from 6% to 7% during the same period on the strength of European CHIPS Act investments and incentives. Southeast Asia is expected to maintain its 5% share of 300mm front-end fab capacity during the forecast period.