Canada’s technology industry says flaring tensions between China and Taiwan are reminding companies how important it is to seek a broader range of sources for semiconductors – and to invest in the sector.

Relations between the two Asian countries have become increasingly tense in recent months as China, in a show of power, carried out military drills around Taiwan, home to the world’s largest contract microchip maker.

If tensions persist and move beyond a drill, deliveries of the Taiwan Semiconductor Manufacturing Company (TSMC)’s semiconductors, known as chips, to big-name brands could slow or be halted. TSMC chips power a slew of electronics ranging from iPhones to Lockheed-Martin fighter jets.

“We are exposed, of course, as all countries in the world are exposed,” said Hamid Arabzadeh, chief executive of Ranovus, an Ottawa-based technology company. 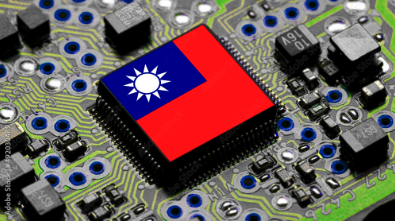 ‘Near monopoly” on the most advanced chips

The article added the company, which dwarfs Samsung’s 15 per cent market share with 85 per cent of the market, is of particular importance because it has a “near monopoly” on the most advanced chips – 10 nanometres or smaller – and has mastered producing them with less energy.

Meanwhile, Canada has a lack of semiconductor foundries and building new ones rivalling TSMC’s capabilities would take so much capital and time, Arabzadeh said it’s almost inadvisable.

Process can be upended by a speck of dust

Keith Jackson, then-chair of the Semiconductor Industry Association in the U.S., said in Fortune magazine in 2020 that these facilities can cost up to $20 billion to build, nearly twice as expensive as a modern aircraft carrier.

Production is tedious. It can take three months to engrave and transform silicon wafers into semiconductors and the process can be upended by a disturbance as small as a speck of dust.

But there are some ways to offset the impacts of geopolitical tensions that could disrupt semiconductor deliveries without building more foundries in Canada, Arabzadeh said.

The top way is dual sourcing, where companies have multiple suppliers, so if one faces trouble, another can step in with product. However, switching from one source to another might require software changes.

“As soon as the situation with China happened, I’m sure all of the semiconductor consumer companies in Canada and anywhere else in the world started to redesign … to have chips that would be manufactured in all different parts of the world, not just in Taiwan,” said Arabzadeh.

The push for diversification has been happening over the last two years in part because of a global chip shortage prompted by COVID-19 shutdowns, soaring demand for electronics and increasing shipping costs.

The U.S. government has been at the forefront of the push with a multibillion-dollar wave of investment in chip factories because the country is worried it relies too heavily on Taiwan and other Asian suppliers for processor chips used in smartphones, medical devices and cars.

TSMC intends to build a plant in Arizona that is expected to open by 2024.

“A lot of companies have started looking at alternatives (to Asia), so you’ll see Samsung has been slowly getting more market share,” said Joe Deu-Ngoc, the co-founder of Toxon Technologies Inc. and Tincubate in Waterloo, Ont.

“TSMC is no longer the only game in town and a lot of companies are also looking at … setting up those foundries or factories outside of China and Taiwan.”

Canada hasn’t gone that far. However, it launched a $150 million fund in February to invest in the development and supply of semiconductors and gave $90 million to the National Research Council of Canada’s Canadian Photonics Fabrication Centre, the only compound semiconductor foundry in North America that is publicly operated and open to all for use.

“Other countries have thrown in billions of dollars of investment,” said Melissa Chee, a member of Canada’s Semiconductor Council and president of the VentureLab tech hub in Ontario’s York Region. “Those are orders of magnitude that Canada may not be ready to invest, but that certainly doesn’t mean that we aren’t going to play a strategic value and part of that supply chain going forward.”

Though she acknowledges the country currently has “limited opportunities” for mass chip manufacturing, she sees semiconductor design happening in Canada and more companies looking to onshore their operations.

It’s made her believe that the shortages of the last few years and ongoing geopolitical tensions are a chance to reshape the country’s chip processes, for the better.

“Where there’s disruption, there’s always an opportunity,” she said. “This is a really Canadian moment… that is going to form the bedrock of part of Canada’s competitive advantage for the long term.”