Charging and discharging a lithium-ion battery multiple times causes significant change to the volume of the anode, reducing the battery capacity and battery life. Now researchers from GIST in Korea have developed a method to strengthen the anode, making it more resilient against volume changes. The anode can be modified irrespective of its material or how it is manufactured, making the approach universal and opens doors to long-lasting smartphone and electric car batteries.

The advent of electric vehicles has given rise to the demand for lithium-ion batteries with high energy densities. This has led to the development of anodes with large charge storage capacity. Unfortunately, this storage capacity tends to degrade over multiple charge/discharge cycles, reducing the battery life.

The short battery life results from an irreversible volume change in the anode during cycling, which causes degradation of electrical contacts and structural collapse. During charging, lithium ions move from the cathode and combine with the nanoparticles in the anode. During discharging, the lithium ions move back to the cathode. Over time, the nanoparticles in the anode crack and cluster together at the electrode-electrolyte interface. This causes an electrical disconnection, reducing the amount of charge the anode can store or transport. 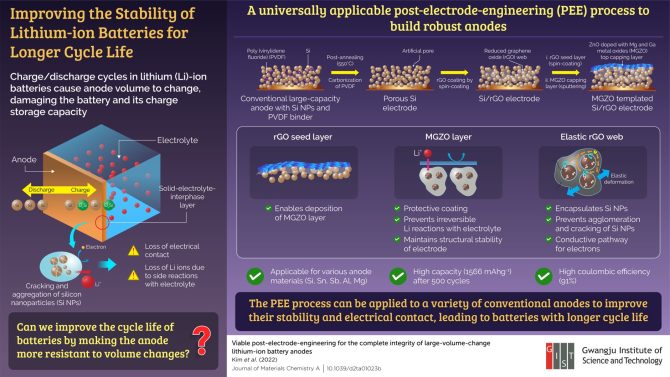 In a recent study published online this spring, researchers from the Gwangju Institute of Science and Technology (GIST) in Korea developed a novel method for modifying conventional anodes to improve the cycling performance of the battery. “As one of the research groups engaged in this field, we wanted to develop an electrode process that would be able to increase the energy density in line with the rapid growth of the battery industry,” says Professor Hyeong-Jin Kim, one of the corresponding authors of the study.

Strengthens the anode and makes it more resilient

The method developed by the researchers strengthens the anode and makes it more resilient against volume changes by encapsulating the nanoparticles in an elastic web-like structure.

To demonstrate their approach, the researchers used a conventional anode containing silicon nanoparticles held together by a polymer (polyvinylidene fluoride) binder. To accommodate the web-like structure, they removed the binder by heating the anode using an annealing process. The gap between the nanoparticles was then filled in with reduced graphene oxide (rGO) solution, which dried up to form a web that held the silicon nanoparticles together and prevented them from cracking. Additionally, the web provided a conductive pathway for the electrons, allowing the nanoparticles to bind with lithium.

The researchers used a technique called “spin coating” to coat the anode surface with rGO. The rGO coating served as a seed layer for the deposition of a protective layer consisting of zinc oxide with magnesium and gallium metal oxides added to it (MGZO). This MGZO layer provided structural stability to the anode.

Upon testing, the modified anode could retain most of its charge even after several charge/discharge cycles. “The structure retained a high storage capacity of 1566 mA h g-1 after 500 cycles and showed 91% coulombic efficiency, which relates to the battery life. This could pave the way for electric vehicles that enable us to drive long distances on one-time charging,” highlights Prof. Kim.

While the researchers used a silicon anode, the developed method is applicable to other anode materials, such as Sn, Sb, Al and Mg. Moreover, the anodes can be modified regardless of how they were manufactured, making it a universally applicable method for improving battery life.

The Gwangju Institute of Science and Technology (GIST) is a research-oriented university situated in Gwangju, South Korea. The university aims to create a strong research environment to spur advancements in science and technology and to promote collaboration between international and domestic research programs.