Can bacteria power a ‘green’ revolution in personal electronics?

Researchers at the University of Massachusetts Amherst recently announced that they have figured out how to engineer a biofilm that harvests the energy in evaporation and converts it to electricity. This biofilm, which was announced in Nature Communications, has the potential to revolutionize the world of wearable electronics, powering everything from personal medical sensors to personal electronics

“This is a very exciting technology,” says Xiaomeng Liu, graduate student in electrical and computer engineering in UMass Amherst’s College of Engineering and the paper’s lead author. “It is real green energy, and unlike other so-called ‘green-energy’ sources, its production is totally green.”

That’s because this biofilm—a thin sheet of bacterial cells about the thickness of a sheet of paper—is produced naturally by an engineered version of the bacteria Geobacter sulfurreducens. G. sulfurreducens is known to produce electricity and has been used previously in “microbial batteries” to power electrical devices. But such batteries require that G. sulfurreducens is properly cared for and fed a constant diet. By contrast, this new biofilm, which can supply as much, if not more, energy than a comparably sized battery, works, and works continuously, because it is dead. And because it’s dead, it doesn’t need to be fed.

“It’s much more efficient,” says Derek Lovley, Distinguished Professor of Microbiology at UMass Amherst and one of the paper’s senior authors. “We’ve simplified the process of generating electricity by radically cutting back on the amount of processing needed. We sustainably grow the cells in a biofilm, and then use that agglomeration of cells. This cuts the energy inputs, makes everything simpler and widens the potential applications.” 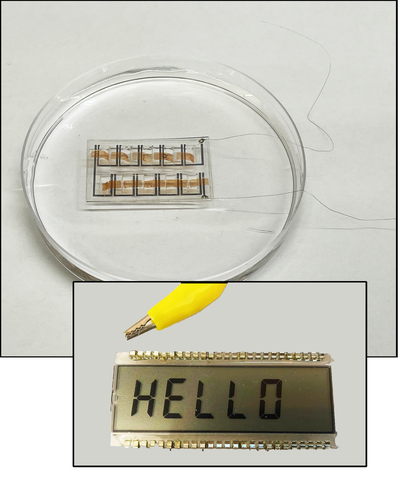 The secret behind this new biofilm is that it makes energy from the moisture on your skin. Though we daily read stories about solar power, at least 50% of the solar energy reaching the earth goes toward evaporating water. “This is a huge, untapped source of energy,” says Jun Yao, professor of electrical and computer engineering at UMass, and the paper’s other senior author. Since the surface of our skin is constantly moist with sweat, the biofilm can “plug-in” and convert the energy locked in evaporation into enough energy to power small devices.

“The limiting factor of wearable electronics,” says Yao, “has always been the power supply. Batteries run down and have to be changed or charged. They are also bulky, heavy, and uncomfortable.” But a clear, small, thin flexible biofilm that produces a continuous and steady supply of electricity and which can be worn, like a Band-Aid, as a patch applied directly to the skin, solves all these problems. 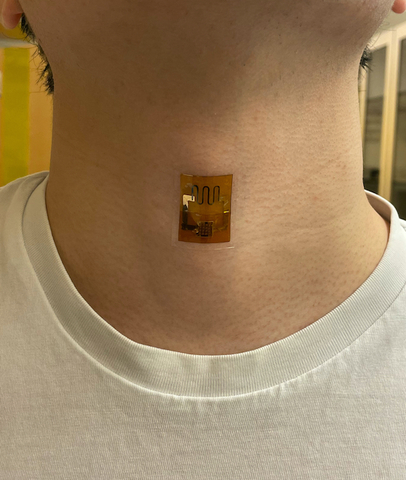 What makes this all work is that G. sulfurreducens grows in colonies that look like thin mats, and each of the individual microbes connects to its neighbors through a series of natural nanowires. The team then harvests these mats and uses a laser to etch small circuits into the films. Once the films are etched, they’re sandwiched between electrodes and finally sealed in a soft, sticky, breathable polymer that you can apply directly to your skin. Once this tiny battery is “plugged in” by applying it to your body, it can power small devices.

“Our next step is to increase the size of our films to power more sophisticated skin-wearable electronics,” says Yao, and Liu points out that one of the goals is to power entire electronic systems, rather than single devices.

This research was nurtured by the Institute for Applied Life Sciences (IALS) at UMass Amherst, which combines deep and interdisciplinary expertise from 29 departments to translate fundamental research into innovations that benefit human health and well-being. 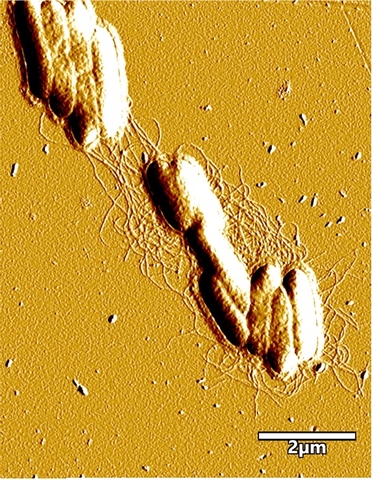 The tiny nanowires connecting colonies of G. sulfurreducens to each other.
Source: Xinying Liu