A precursor that improves reactivity with both oxygen and hydrogen and can form high-quality ruthenium films,  the TRuST process is a two-stage atomic layer deposition (ALD) development that uses hydrogen film formation to create a thin anti-oxidation film and oxygen for the deposition of a high-quality ruthenium film. It eradicates concerns that the substrate will become oxidized and, at the same time, can prevent the drop in ruthenium purity that occurs during hydrogen film deposition.

The film deposition process was proposed by Professor Soo-Hyun Kim from the School of Materials Science and Engineering, College of Engineering, Yeungnam University in South Korea. The development and evaluation of the film deposition process were jointly conducted by Professor Kim and TANAKA Kikinzoku Kogyo.
This technology is expected to achieve greater miniaturization and improved durability of semiconductors. It can therefore be expected to be used in data centers and smartphones – which require even greater data processing capabilities – and contribute toward advanced technologies such as IoT and autonomous driving, which require sophisticated technological innovations.

In the past, the most common thin film and wiring materials used for semiconductors were copper, tungsten, and cobalt, but there are increasing expectations for the precious metal ruthenium to promote greater miniaturization of semiconductors because of its lower resistance and higher durability. Therefore, TANAKA Kikinzoku Kogyo developed TRuST – a liquid ruthenium precursor for chemical vapour deposition (CVD) and ALD that achieved the world’s highest vapour pressure value – and started providing samples in 2020.
By increasing to the world’s highest vapour pressure value, which is more than 100 times higher than existing precursors, this precursor raises the concentration of precursor in the film deposition chamber and the adsorption density of precursor molecules on the substrate surface, achieving excellent step coverage and improved film deposition speed. 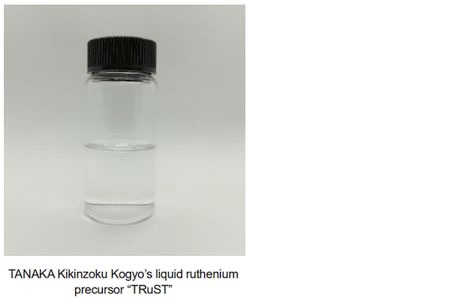 The progress of advanced technologies such as IoT, AI, 5G, and the metaverse has led to rapidly increasing volumes of digital data used by digital devices such as smartphones. Therefore, in the development of semiconductors, the need for even greater miniaturization is increasing to enable the creation of devices with higher performance and lower energy consumption. In the aspect of durability, degradation due to base oxidation is also a major issue in semiconductor development.