Semiconductor manufacturers worldwide are on track to boost 200mm fab capacity by 1.2 million wafers, or 21%, from the start of 2020 to the end of 2024 to hit a record high of 6.9 million wafers per month, SEMI announced today in its 200mm Fab Outlook Report. After climbing to $5.3 billion last year, 200mm fab equipment spending is expected to be $4.9 billion in 2022 as 200mm fab utilization remains at high levels and the global semiconductor industry works to overcome the chip shortage.

The SEMI 200mm Fab Outlook Report, covering the 12 years from 2013 to 2024, also reveals that foundries will account for more than 50% of fab capacity worldwide this year, followed by analog at 19% and discrete/power at 12%. Regionally, China will lead the world in 200mm capacity with 21% share in 2022, followed by Japan with 16% and Taiwan and Europe/Mideast at 15% each. 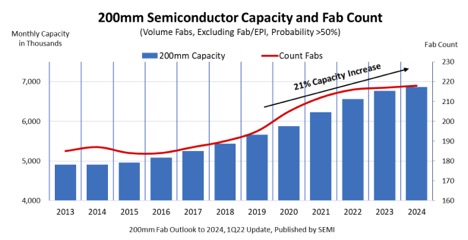 Equipment investments are projected to remain above $3 billion in 2023, with the foundry sector accounting for 54%, followed by discrete/power at 20% and analog at 19%.

The SEMI 200mm Fab Outlook Report lists more than 330 fabs and lines and includes 64 changes across 47 fabs since its most recent update in September 2021.