Is advanced anode technology the way to improve Li-ion batteries

Li-ion batteries are beginning to hit their performance ceiling, especially with regards to energy density. However, a shift in the anode materials used, namely to silicon or lithium-metal anodes, could provide a stepwise improvement to energy density. Their promise can be highlighted by looking at the high number of early-stage companies primarily developing anode materials, most being focussed on silicon, compared to other areas of Li-ion development. 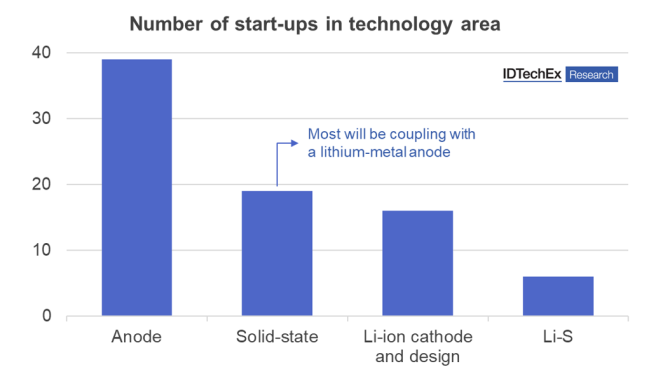 The reason for this interest comes from the fact that silicon has the potential to significantly increase battery energy density, given it has a capacity an order of magnitude higher than the commonly used graphite. Cell level energy density could almost double over current state-of-the-art, bringing obvious benefits to electric vehicle (EV) range or smartphone runtime.

Beyond this headline number, silicon can also improve the appeal of lower energy cells, such as lithium iron phosphate (LFP), narrowing the gap to nickel-manganese-cobalt oxide (NMC) type cells and minimizing the core disadvantage of LFP, especially for battery electric vehicles. IDTechEx calculations estimate that incorporating 20% silicon into an anode could improve energy density by 17%.

The issue with using silicon as an anode is longevity or lack thereof. The volume changes that it undergoes during cycling leads to the consumption of electrolyte and lithium and causes mechanical stresses that ultimately result in the loss of electrical and ionic conductivity. Incorporating porosity, electrolyte additives, and conductive and binding networks are just some of the solutions that are being developed.

Silicon also has a reduced risk of dendrite formation, while the porosity and conductive additives that are generally needed further help with fast-charge capability and operation at low temperatures. Overall, silicon anodes represent a highly promising proposition and companies are now advertising cells with reasonable cycle lives, providing evidence that the key drawback of silicon is close to being overcome. 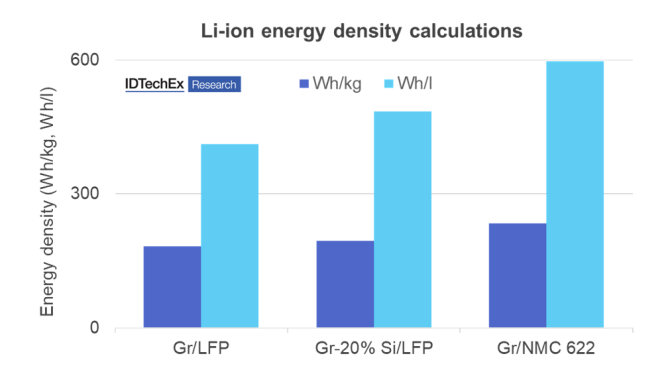 Lithium-metal anodes also hold great promise for improving energy density but again, they suffer from poor cycle life. They are also at higher risk of dendrite formation and short-circuits. Solid-State electrolytes are being widely developed as a solution but designs using a thin protective barrier and a stable liquid electrolyte are also being explored as a means to enable lithium-metal anodes.

SES is a prominent example of a company using this type of approach. In fact, the use of a more conventional separator/electrolyte system may be beneficial to energy density and manufacturability, though the safety benefits of using a solid electrolyte may have to be diminished to some extent. With some of the performance and technical challenges with silicon and lithium-metal being solved, the key to their success is starting to shift toward how these solutions can be manufactured at scale and integrated into current battery manufacturing processes. With similar advantages and disadvantages, ultimately, the question will not be about the use of silicon or lithium, but the implementation of a given innovation or solution.

Improvements are being made with Li-metal-based cells

Beyond just energy density, fast charging is another key metric with the potential for grabbing headlines. Silicon anodes may be well suited to fast charging and claims around fast charging of Li-metal-based cells suggest improvements are being made here too, though performance needs to be verified in commercially relevant cell designs.

But, some applications may require both fast-charge capability and very long cycle lives beyond the 1000 cycles generally possible with Si or Li. More novel anode materials based on niobium and tungsten oxides are under development by Toshiba, Echion, and Nyobolt, with promises of 5-6 minute charging times, cycle lives in the 10’s of thousands but with energy densities likely to sit below LFP.

While there is long-term upside for these materials, their comparatively low energy densities rule them out for BEVs and most consumer devices, though there are applications where this high-power, long cycle life capability could be highly valuable. As such graphite, followed by silicon and lithium-metal are set to be the key anode materials over the coming decade. IDTechEx forecast that demand for silicon anode material, by weight, will grow at a CAGR of 45% between 2022 to 2032. 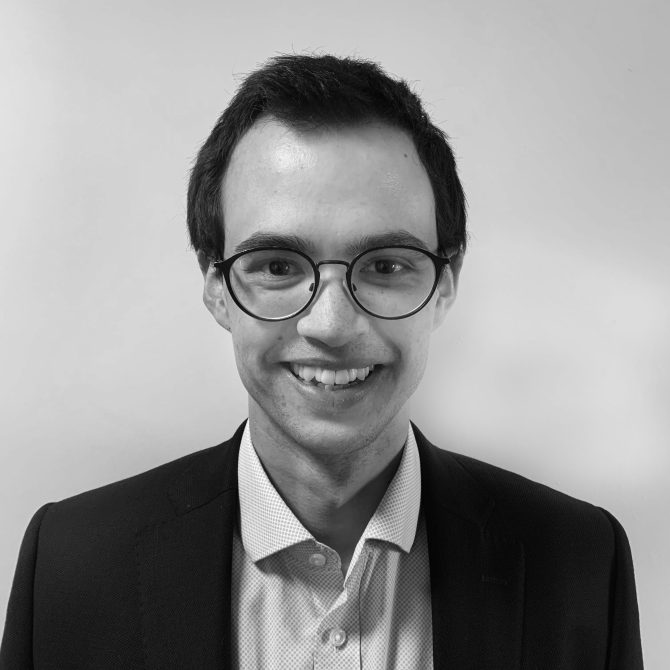