In terms of the global supply chain, in addition to the production capacity of major IDM manufacturers including TI, Infineon, ADI, STMicroelectronics, NXP, ON Semiconductor, Renesas, Microchip, ROHM (Maxim has been acquired by ADI and Dialog by Renesas), IC design houses such as Qualcomm and MediaTek (MTK) have obtained a certain level of production capacity from foundries. Of these, TI is in a leadership position and the aforementioned companies possess a combined market share of over 80%. 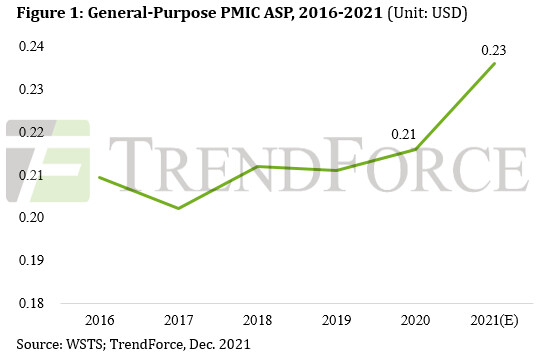 In terms of product structure, unrelenting demand from the consumer electronics, telecommunications, industrial control systems, and automotive end-user sectors and product innovation driven by industrial transformation will push a dramatic increase in global market demand for PMICs. The largest application for PMICs is consumer electronic products and there are near term rumblings in demand for notebooks, Chromebooks, smartphones, and televisions. In addition, restocking impetus for a small number of structurally simple items such as low drop-out regulators (LDO) has encountered a real slowdown. However, since the demand placed on PMICs by electronic products is a structural increase, certain models are still experiencing shortages. Qualcomm and MTK are limited by a shortage of mature production capacity on the foundry end, even resulting in a tightening of inventory for PMICs earmarked for self-use.

Furthermore, recovery in the automotive market and rapid growth in electric vehicles, automotive electronics, and advanced driver-assistance systems (ADAS) have increased demand in power source control and management and charging technology. In addition, automotive-use ICs are required to pass a number of inspections and must guarantee consistency and a zero failure rate. Currently, IDM companies’ automotive IC order backlog stretches until the end of 2022. Due to factors such as production running at full capacity and a shortage of raw materials, PMIC suppliers have currently announced longer lead times with consumer electronic IC lead times increasing to 12~26 weeks, automotive IC lead times reaching 40~52 weeks, and a cessation of orders for certain exclusive production models.

TrendForce expects 4Q21 demand for PMICs to remain strong with shortages in overall production capacity. Led by IDM companies, PMIC pricing will remain high. Despite variables related to the pandemic and the difficulties of greatly increasing 8 inch wafer production capacity, TI’s new fab RFAB2 will begin mass production in 2H22. In addition, due to the plans of foundries to carry forward a portion of 8 inch wafer PMIC manufacturing to 12 inch, there is a high likelihood of a moderation in PMIC shortages. However, close attention must still be paid to changes in future market supply.