A new report from Canada’s Semiconductor Council says the country should form a government-led consortium of chip buyers by 2025 to overcome a global shortage crippling manufacturers and prevent further troubles. The report released on Tuesday and based on input from 100 business leaders, chipmakers and investors says a consortium making high-volume purchases of semiconductors would give the country more negotiating power with international suppliers.

“The time for us to act is now,” said Melissa Chee, a member of the council formed in May and the president of VentureLab, a tech hub in Ontario’s York Region. “We are heading into a holiday season and most of the things that people may be looking to buy all likely have electronics built into them ? This is really Canada’s moment to shine and get on to the podium.”

Chee’s remarks and the consortium suggestion – one of 20 recommendations made in the council’s report – come as businesses around the world are struggling to address supply chain issues. Shortages of workers and materials, soaring shipping costs and overwhelmed ports are making manufacturing and delivering goods increasingly difficult and costly. 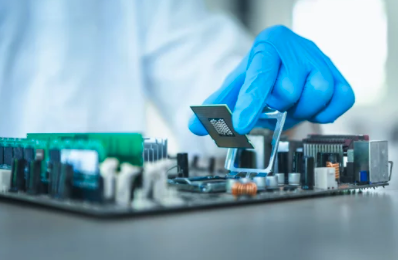 Experts have warned it could take years to clear the shortage of semiconductors triggered by soaring demand for products made with chips, factory closures caused by COVID-19, a fire at a Japanese semiconductor plant and a cold snap that shut down another facility in Texas.

Apple has warned the shortage could cut $4 billion from its sales; General Motors temporarily laid off 1,500 workers at its Ingersoll, Ont., plant because of the lack of chips its vehicles require; and Canadian toymaker Spin Master Corp. previously said it was considering price increases to deal with the situation.

Companies may get some small volumes here in Canada

While the consortium could help fast-track shipments of semiconductors to Canada, stakeholders consulted by Canada’s Semiconductor Council also believe the country has to be thinking more long-term and domestically.

“There’s no high-volume (semiconductor) manufacturing here in Canada today,” said Chee. “Companies may get some small volumes here in Canada, but for the large volumed, so if you’re looking at something like an AI chip or an accelerator, those are highly advanced technologies and there are only a few fabrication companies around the world, mainly in Asia, as well as the U.S. and Europe.”

The stakeholders she has talked to want to see domestic production of semiconductors increased and the development of more onshore manufacturing, which they think would help get their orders prioritized and boost the economy. The council recommends the country start looking at onshoring by researching which semiconductors have the most demand, establishing business models to fabricate those chips and then attracting multinational partnerships and engineering talent.

The report warns that these tasks can be time-consuming and expensive. Some semiconductor fabrication facilities can cost about US$5 billion in land, equipment and materials, and advanced logic and memory factories can reach US$20 billion. However, the report said its research shows each new facility built in the U.S. creates about 110,000 temporary jobs and 4,200 permanent ones.

While the country considers building its own semiconductor capacity, the report said Canada should invest in sensor and electric vehicle research and development and domestic companies that are designing and developing AI- and quantum-enabled chips. A spokesman for Innovation, Science and Industry Minister Francois-Philippe Champagne said the department is reviewing the council’s recommendations and will continue to work with international and industry partners to explore opportunities to grow the Canadian semiconductor industry.

“Canada has limited domestic capacity in the production of high-volume semiconductors, however our domestic industry is recognized for its strengths in cutting-edge research and development, and manufacturing capabilities in niche areas like sensors, microelectromechanical systems, and advanced packaging,” John Power wrote in an email. “The global shortage of semiconductors has seen many countries examine the security and viability of their critical supply chains, and Canada is no exception.”