Global wearables shipments grew 32.3% year-over-year as volumes reached 114.2 million during the second quarter of 2021 (2Q21), according to a recent report by International Data Corp. (IDC). Despite early signs of slower consumer tech spending, purchases of wearable devices remained strong during the quarter as consumers once again ventured outdoors with the urge to track their health and activity.

Among the various device types, hearables and watches each grew 39% during the quarter as demand continued to soar for these categories. Meanwhile, the market for wristbands remained flat as consumer continue to transition to watches and the category lacked notable product launches during recent quarters.

“Both the watch and hearables categories have seen a sharp rise in adoption due to new entrants as well as discounting on older models,” said Jitesh Ubrani, research manager for IDC Mobility and Consumer Device Trackers. “Watches priced between $200 and $300 have gained 10 percentage points since last year thanks to devices like the Watch SE, Series 3, Versa 3, and the Galaxy Watch Active 2. Meanwhile, hearables in the sub-$100 space have enjoyed a similar trend largely thanks to brands such as Xiaomi, BoAt, Huawei, JBL, and JLAB as they have succeeded at making premium features such as active noise control (ANC) more affordable.”

What also makes these devices popular is the variety in feature sets and price points. “As the market has matured, so have vendor product portfolios,” said Ramon T. Llamas, research director for IDC’s Wearables Team. “Offering a selection of good/better/best devices at staggered price points allows companies to approach more customers. Over time, features once reserved for only the high-end devices will eventually make their way down to the mid-tier and the mass market. This, in turn, will lure people to upgrade or purchase their first devices, thus placing wearables – both watches and hearables – on a steady treadmill of growth and upgrades.”

Apple once again led the market with 28.2% share though growth slowed to 9.3%. The slowdown in year-over-year growth was somewhat expected given Apple’s aging product lineup as well as the surge in sales it has seen over the past few quarters.

Xiaomi ranked second thanks to its tremendous progress in the hearables category. On a unit basis, hearables surpassed wristbands for the company for the first time. The company continues to employ the same strategy in hearables as it does in wristbands, namely low-cost devices with a strong online presence.

Despite Huawei’s growth across most regions, the company continues to rely heavily on its home market of China. More than three quarters of Huawei’s shipments were in China in 2Q21 up from 72.9% last year. By making its wearables compatible with any Android phone and by offering very competitive pricing, the company has managed to experience some growth even in markets where Huawei’s phone business has declined.

Samsung captured the fourth position. As one of the few premium smartwatch and hearables vendors outside of Apple, the company has managed to carve out a nice spot for itself in mature markets and is often regarded as the de facto choice of wearables for Android users. The company’s growth is also attributed to the multiple brands and price points offered.

Imagine Marketing, the company behind the popular BoAt brand, rounded out the top 5. Though the company has its beginnings in the hearables business, it has since expanded into watches and wristbands as well. However, the company still operates only within India. 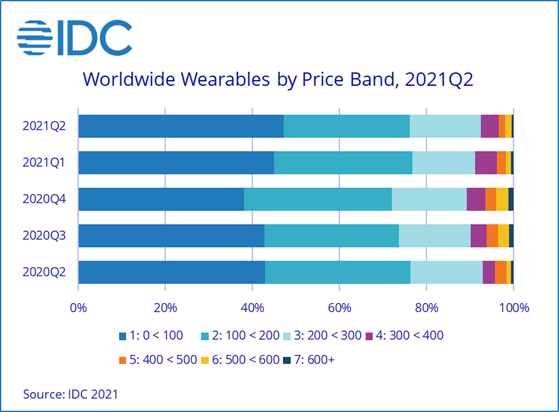