Polymer semiconductors — materials that have been made soft and stretchy but still able to conduct electricity — hold promise for future electronics that can be integrated within the body, including disease detectors and health monitors. Yet, until now, scientists and engineers have been unable to give these polymers certain advanced features, like the ability to sense biochemicals, without disrupting their functionality altogether.

Researchers at the Pritzker School of Molecular Engineering (PME) have developed a new strategy to overcome that limitation. Called “click-to-polymer” or CLIP, this approach uses a chemical reaction to attach new functional units onto polymer semiconductors. 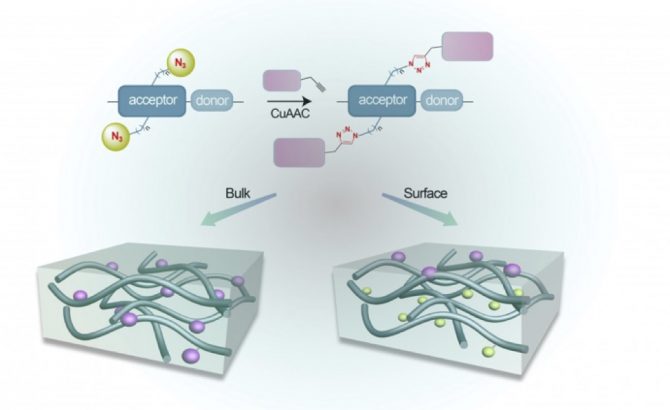 A diagram of the CLIP method, which uses a copper-catalyzed azide-alkyne cycloaddition to add functional units to a polymer. (Illustration courtesy of Wang Research Group)

“Semiconducting polymers are one of the most promising materials systems for wearable and implantable electronics,” said Asst. Prof. Sihong Wang, who led the research. “But we still need to add more functionality to be able to collect signals and administer therapies. Our method can work broadly to incorporate different types of functional groups, which we hope will lead to far-reaching leaps in the field.”

Functionalizing polymers without decreasing their efficacy

To achieve new functionalities of these semiconducting polymers — also referred to as conjugated polymers — many researchers have previously tried to build them from scratch by incorporating advanced features into the molecular designs directly. But conventional procedures for doing this have failed, either because the molecules have been unable to withstand the conditions needed to attach them to the polymer chains, or because the synthesis process decreased their efficacy.

To overcome this, Wang, with graduate student Nan Li, developed the CLIP method, which uses a copper-catalyzed azide-alkyne cycloaddition to add functional units to a polymer. Because this “click reaction” happens after the polymer is created, it does not affect its initial properties much.

To demonstrate the effectiveness of CLIP, the researchers attached units that could photo-pattern the polymer, important for designing circuits within the material. They also added functionality to directly sense biomolecules. Their biomolecule sensor used a glucose oxidase enzyme to detect glucose, which then causes changes to the polymer’s electrical conductance and amplifies the signal. 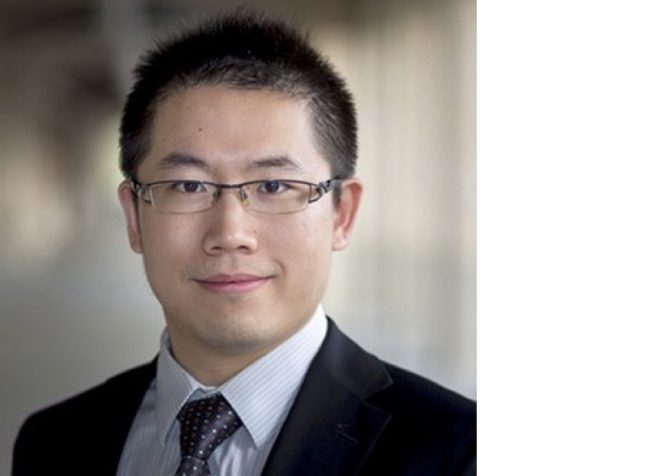 Now the group is building upon their success by adding other bio-active and biocompatible functionalities to these polymers, which Li says “has the potential of becoming a game-changing technology.”

“We hope researchers across the field will use our method to endow even more functionality into this material system and use them to develop the next generation of human-integrated electronics as a key tool in healthcare,” Wang said.