The MIPI Alliance, an international organization that develops interface specifications for mobile and mobile-influenced industries, today announced the next generation of its widely implemented MIPI Display Serial Interface 2 (MIPI DSI-2) specification. MIPI DSI-2 v2.0 delivers significant improvements to the user experience while boosting power savings across far-reaching application spaces such as mobile, automotive and gaming. When coupled with the most recent versions of the MIPI C- and D-PHY physical interfaces, it also offers twice the bandwidth over the previous version.

Specifying the high-bandwidth link between host processors and displays, MIPI DSI-2 helps systems designers deliver the ultra-high-definition (UHD) video experience that their customers seek, while maximizing battery life, and minimizing cost and complexity. Features in the new version enable displays to seamlessly and efficiently operate in a variety of use cases, from high-resolution, high-frame-rate video modes (such as 8K with 120 fps), to responsive, low-latency graphical user interface “command” modes, and static modes—for dramatically improved display performance at the lowest possible power consumption. DSI-2 v2.0 is backward compatible with all previous versions of the specification. 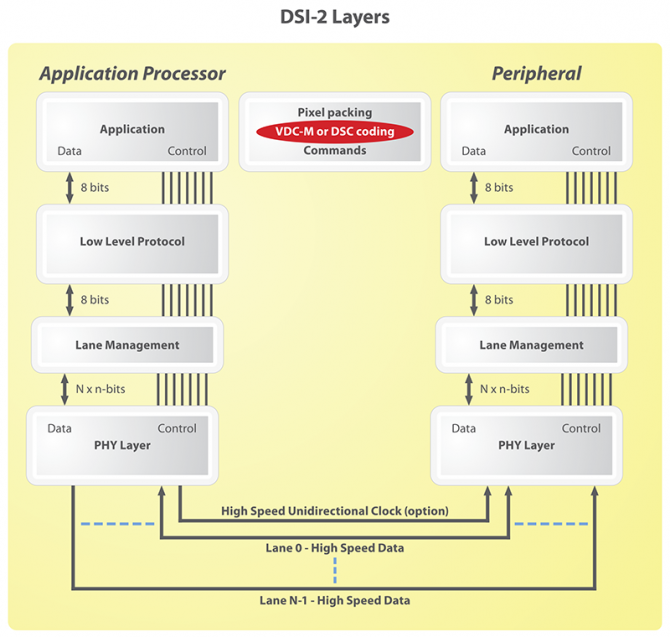 “MIPI DSI-2 is deployed in many of the world’s handsets, smartwatches, virtual reality headsets, laptops, tablets and automobiles, and this significant update delivers the next generation of features required to propel innovation in display technologies,” said Joel Huloux, chairman of MIPI Alliance. “The new features introduced in MIPI DSI-2 v2.0 work together to enable dramatically enhanced gaming and other rich visual experiences at the lowest power consumption across the gamut of display applications.”

A key new feature is a video-to-command mode, which enables displays to seamlessly transition from highly immersive video modes of operation to less-intensive command modes for low-frame-rate GUI images. With the increasing popularity of gaming on mobile devices, this allows mobile-phone users, for example, to switch between gaming and other applications with minimal latency and performance impacts, while keeping the device’s power consumption in check.