Consumer mass-market augmented reality (AR) products and applications could become the fourth wave of modern technological progress, following the PC and smartphone in transformative impact on nearly all aspects of life and business, according to new analysis from Lux Research, a provider of tech-enabled research and advisory services.

However, making widespread consumer AR a reality will require significant innovations in key areas to reduce size and weight while improving performance, says a recent report from Lux Research.

The report explores the materials and hardware innovations enabling consumer-grade AR glasses and provides guidance on the technologies with the greatest opportunities. The report identifyies three components that offer the greatest potential for innovations: 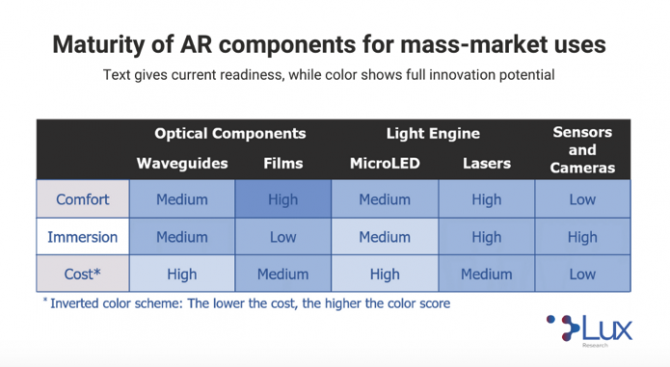 “Achieving both comfort and immersion levels at a reasonable cost requires miniaturization of all the components with simultaneous performance improvements,” explains Vladimir Roznyatovskiy, Ph.D., Senior Analyst at Lux Research and lead author of the report. “Optics, light engines, sensors, and batteries take up the largest amount of physical space and, therefore, offer the greatest potential for innovations.”

All basic components for functional and immersive AR headwear are available today, but their maturity varies, with many having significant potential future growth. Several large corporations, such as Microsoft and Lenovo, are turning to these products for enterprise applications. However, the transition to consumer AR glasses requires significant innovations in optical components, light engines, and sensors in order to achieve the desired combination of immersion and comfort prior to entering the mass market. The progress will take several years, depending on the maturity of each of the components and the potential for improvements. The market evolution will be staged, with the release of limited-function products like AR smart glasses first and with fully immersive and comfortable AR glasses to follow. Lux predicts that the adoption of smart glasses with limited functions like notifications, navigation, and productivity assistance will begin in the next two to five years, while fully immersive and slick AR glasses capable of blending the virtual and real worlds will take at least five to seven years.