Automotive OEMs have always added features to differentiate their vehicles, either from other brands or from other models in their product range. Traditionally this was done primarily by changing the engine parameters, for example increasing the displacement, using more cylinders, or adding a turbocharger.

However, these options for differentiation are substantially curtailed in EVs. Most consumers can’t distinguish between different motor or inverter designs, so the only distinguishing factors are range, horsepower, and possibly charging rate.

As such, manufacturers are increasingly using interior features to distinguish between models and from other brands. This transition is eloquently expressed in the quote from the president of a gauge cluster/cockpit manufacturer: “The cockpit is where the battleground has now shifted. It’s no longer what is under the hood, but what’s inside the cockpit.” There are, therefore, extensive opportunities for printed/flexible electronics to add additional functionality to the cockpit while facilitating efficient manufacturing, as outlined in a recent report released by  IDTechEx. 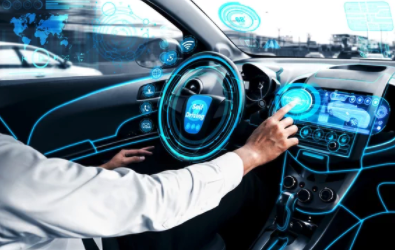 The increasing number and size of colour displays in automotive interiors is clearly apparent, with the recently launched Honda-E having six just for the front seat passengers. Display placement goes beyond the conventional centre screen and digital gauge clusters to include displays for mirrors and passenger entertainment. OLEDs are likely to be increasingly adopted, as the resolution and colour gamut meet the expectations consumers transfer from their smartphones. Conformality should also enable a wider range of integration opportunities, such as safety improving ‘transparent’ pillars.

No discussion of automotive interior trends is complete without mention of smart surfaces, in which capacitive touch sensors and lighting integrated within interior panels replace mechanical switches. The technology driving this transition is in-mold electronics (IME), in which electronic, decorative, and mechanical features are combined in a single component. This is achieved by screen printing conductive traces and mounting simple SMD components onto a film, thermoforming, and then finally injection molding.

IME enables multifunctional components such as centre consoles and overhead control panels to be much lighter, simpler, and easier to manufacture. An additional benefit is the decoupling of structural and electronic/decorative functionality, thus making ‘versioning’ more straightforward since the same molds for thermo and injection molding can be used to make parts with varying appearance and functionalities. Furthermore, IME enables new use cases, such as adding electronic and touch-sensitive functionality into the backs of the front seats, with some automotive OEM design teams having identified over 40 distinct use cases.

Smart surfaces are also likely to evolve to offer more sophisticated interactions than simple capacitive sensors or on/off buttons. For example, printed pressure sensors are likely to find their way into control panels, thus providing a wider range of inputs. Haptic feedback is also likely to become widely integrated since positive actuation is both more satisfying to use and arguably safer if it minimizes the need for the driver to take their eyes off the road.

The existing approach to heating car interiors by blowing hot air around is very inefficient and highly detrimental to the range of electric vehicles. Printed/flexible electronics to incorporate heaters within touchpoints is significantly more efficient – as such this approach is likely to be extended beyond seats and steering wheels to encompass armrests and centre consoles. Furthermore, the conformality of printed electronics enables heaters to be placed much closer to the surface, making heating more efficient and responsive. Transparent conductors take this idea a step further and can be applied just under the surface of materials, enabling them to be combined with lighting elements.