Haptic exoskeletons expand to full-body effects, with potential use in industries from gaming to the medical field

Haptic technologies, familiar to most through the buzz of the keypad on a touchscreen, are actuator applications that target the sense of touch. Many common haptic applications only target a particular area, for example, smartphones affecting the hands and fingers, but haptic exoskeletons expand their effects to a full-body experience, with potential use in industries from gaming to the medical field.

Exoskeletons as a game-changer

Haptic technologies have been present in gaming for a long time – some readers will remember snapping the “rumble pak” onto the controllers of their Nintendo 64 for the full experience of crashing in Diddy Kong Racing. New initiatives are considerably more sophisticated, taking virtual and augmented reality games to the next level.

When wearing a full or partial haptic exoskeleton, the tactile haptics could indicate interaction with an object by vibrating as the user moves closer and/or directly into contact with it. Taking this further, a kinaesthetic haptic could directly block the user from overlapping with a solid object; whilst the texture or “feel” of the object may not be perfect, the user could at least be prevented from placing their hand within a virtual object which is supposed to be solid. Combined with virtual reality goggles, these exoskeletons could contribute in the future to a fully immersive gaming experience. 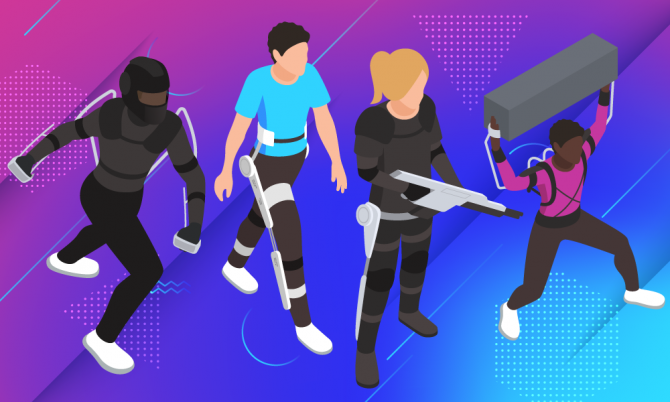 While full gaming exoskeletons are yet to be released onto the market, new gaming innovations hint at more to come. Tactical Haptics have developed controllers which can be configured in different orientations, managed physically by magnets on the exterior, and guided by prompts in the virtual game environment.

The game they demonstrated involved using the configuration to make different types of gun (e.g. shotgun vs turret vs twin handguns). The actuators move laterally against the user’s skin whilst holding the controllers to simulate the recoil sensation with the controllers in different orientations. 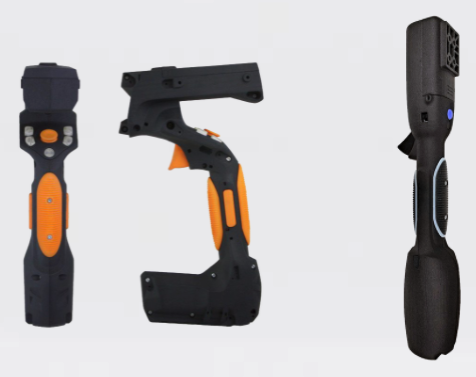 Reactive Grip touch feedback can be used to convey motion and force information using tactile feedback integrated into the handle of a device. Source: Tactical Haptics

TEGway have developed thermoelectric haptics technology, demonstrating at CES 2020 with an application called “Snow Fight”. The player can throw snowballs or fireballs at the opponent, feeling the temperature of each as they are thrown or hit by them.

They said that the main technology advantage that they have is making the material thinner and lighter with the same performance. This applies at the thermoelectric material, but also in the heat sink which they use to dissipate heat to maintain the temperature gradient.

IDTechEx Analyst James Hayward commented that the thermal feedback was certainly convincing, and at times slightly unnerving (going from a very cold to very hot sensation on the back of your hand is not the most comfortable sensation).

Between these two examples, the potential future for immersive gaming and virtual reality promises to be intense and all-consuming. 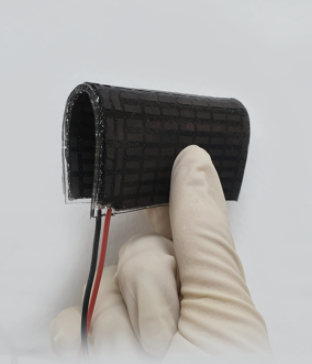 Exoskeletons for medical use

The biggest and most vital impacts of haptic exoskeletons can be seen in the medical field. This TikTok video shows the marked improvement in movement a haptic suit allows for a person suffering from Parkinson’s disease. This is just one in a myriad of exoskeleton advances that can make daily life more accessible for people with injuries and disabilities.

In 2016, Ekso Bionics received FDA approval for an exoskeleton for stroke and spinal cord injury rehabilitation. They develop exoskeletons, controllers, and the associated software to make the complete solution.

Samsung demonstrated an assistive mobility device at CES 2020. The project is a lower-body assistive exoskeleton that was developed within Samsung Institute of Advanced Technology (SAIT). The team came from a robotics development group at SAIT, working on many areas such as surgical robots and humanoid robots. However, as these were too far from commercialization, they moved to this exoskeleton approach.

Rehabotics Medical Technology are a Taiwanese company that have developed products used for stroke patient rehabilitation using a hand-worn exoskeleton or glove. A typical setup includes a pair of gloves with one hand controlling the other. Sensors on one hand can detect motion and cause actuation via the exoskeleton on the other hand. This is a typical setup required for stroke rehabilitation where motor skills on one side of the body may be affected. The gloves both sense the motion of the hands and assist it. In addition, the exoskeleton can be programmed to follow a simple pattern to help the user do exercises.

Neofect developed a smart exoskeleton, the Rapael Smart Glove, for use in a home rehabilitation program for patients recovering from strokes. The device is FDA registered and includes more than 40 different exercises. Patients report these to be engaging and fun, which may be useful in adherence to rehabilitation therapy regimens which often require regular, repeated sessions over a period of time to rebuild lost neural connections and regain muscular strength. Clinical trials have revealed improved function and quality of life as a result of therapy with the Smart Glove compared to standard therapy alone. 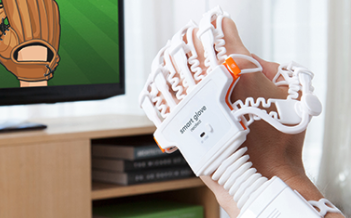