2021 study shows province is home to more than 3,000 tech firms, while rate of female founders is 50% higher than global average

Alberta Enterprise Corporation has released the findings of its 2021 Alberta Technology Deal Flow Study revealing that Alberta is now home to more than 3,000 technology companies, a 233 per cent increase since 2012. The majority (58 per cent) are located in Calgary, with 30 per cent in Edmonton and almost 13 per cent in other regions of the province.

“Over the last two years we’ve seen record-breaking venture capital investment in Alberta and we have seen a tremendous increase in the number of technology companies since we first started measuring,” said Kristina Williams, CEO Alberta Enterprise Corporation. “These milestones demonstrate that our technology sector is resilient and has growth momentum. Investors are choosing to invest in Alberta’s founders and those women and men are successfully starting and growing innovative companies here.”

The Alberta technology industry is showing signs of maturity with almost 40 per cent of local tech companies surveyed exceeding revenues of $1 million, a 66 per cent increase since 2018. Over the last two years, the number of companies with 25 or more employees has increased by 12 percentage points up to 25 per cent.  Fundraising is another key indicator of growth for technology companies, and almost a quarter of Alberta tech companies have raised Series A or later stage financing.

“It’s great to see more than double the number of companies identified in the 2021 Study. Alberta’s tech sector is maturing rapidly and it is now a real driver of employment and diversification. We don’t just want to be a player in Canada’s tech space — we want to become a dominant player going forward,” commented Doug Schweitzer, Minister of Jobs, Economy and Innovation. 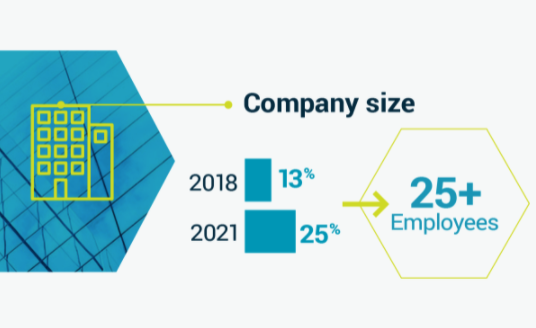 One of the data points Alberta Enterprise was watching closely in the 2021 study was on the diversity of founders in Alberta. Two years ago, the report showed 30 per cent of tech companies in Alberta have a female founder or co-founder. The 2021 report showed almost the same proportion of female leadership suggesting inclusivity is one of the cultural advantages of Alberta — placing it ahead of the global average of 20 per cent female founders.1

Alberta Enterprise initiated an Alberta Tech Deal Flow Study in 2012 with a goal to provide industry stakeholders with a reliable report for measuring the health, growth and composition of the Alberta technology and innovation sector. The 2021 study is the fourth edition, co-authored this year with PwC Canada with the same team that produced the PwC MoneyTree Canada Report.

“By thoroughly tracking key data about our technology sector, we are able to see how to wisely support a sustainable technology industry in Alberta,” added Williams. “Looking at a decade of data, we can see the major growth impact that greater access to venture capital has had for our homegrown Alberta technology companies.” 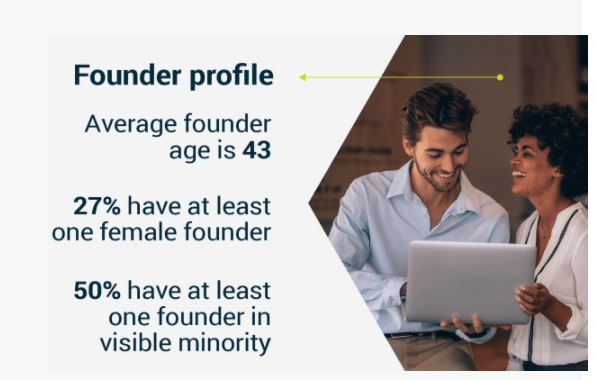 Tech company financing – 43 per cent of Alberta’s technology startups are at the pre-seed or seed stage and 43 per cent have raised at least US $1 million to date.

Tech company growth – 40 per cent of survey respondents have achieved profitability, and 38 per cent of companies reported revenue greater than $1 million in the last fiscal year.

Tech type – 67 per cent of Alberta companies are developing software, many for business-to-business enterprise applications. A significant proportion of companies are integrating digital technologies like artificial intelligence (AI) and machine learning (ML) (36 per cent) and big data (27 per cent) into their products and services. Companies surveyed had customers in the following industries: 34 per cent professional services, 23 per cent in other industrials, 15 per cent in energy and mining, 12 per cent in information and media, 8 per cent health, wellness and medical, and 8 per cent in agriculture.

Investment sources – Alberta tech firms raised capital predominantly from local sources in Alberta, some from other parts of Canada; 10 per cent raised from Silicon Valley.

The 2021 Alberta Tech Deal Flow Study was made possible due to input from Alberta’s tech and venture capital firms and numerous organizations that make up the Alberta startup ecosystem. Alberta Enterprise expresses its thanks to Alberta Enterprise portfolio venture capital funds, Western Economic Diversification Canada (WD), and all those that contributed. We hope the study findings continue to be useful in supporting the growth of Alberta’s technology sector.