A second chance for organic photovoltaics?

Printing solar panels like newsprint using organic semiconductors is the longstanding aspiration, given the obvious benefits of renewable energy and the potential for low-cost, large-area, energy-efficient production. However, despite attempts by Konarka and others, commercializing organic photovoltaic (OPV) panels has previously proved challenging. This was largely due to the falling prices of silicon panels, the comparatively low efficiency of OPV modules, and the difficulty of ensuring adequate long-term stability under constant irradiation.

Around 2015 single-junction organic solar cell efficiencies seemed to be plateauing at around 11%, and the technology was largely regarded as a nice idea that never quite met the necessary efficiency and longevity requirements. However, recently efficiencies have increased, while the differentiated attributes of OPV enable commercial viability for applications such as building-integrated, indoor, and semi-transparent photovoltaics.

OPV offers all the advantages associated with printed electronics: flexibility, thinness, low weight and energy-efficient manufacturing. These attributes make it ideal for small volume emerging applications where flexibility and a thin film format is essential, such as incorporating solar panels into clothing and bags. However, for established applications such as rooftop panels, these are offset by the lower efficiency and perceived lower durability relative to conventional silicon PV.

As such, some of the most promising applications for OPV with the potential for high volumes are those that exploit a feature not present in silicon cells: a tunable absorption spectrum. Changing the molecules used to make the active, light-absorbing layer enables semi-transparent solar cells with around 70% transmission at visible wavelengths. This approach reduces installation costs since window glass will be installed in buildings anyway while harvesting energy from non-visible light reduces air conditioning requirements – Brazilian OPV manufacturer Sunew are seeing rapid growth for this application.

Another emerging application in which OPV is well-suited is indoor energy harvesting. The light-absorbing molecules can be chosen to maximize efficiency for the emission spectrum of indoor lighting, such as white LEDs or fluorescent tubes, while the lower intensity reduces unwanted energy loss mechanisms. These features enable OPV to out-compete silicon PV for indoor applications. Indeed, Swedish company Epishine have raised millions of Euros to commercialize OPV for indoor energy harvesting, targeting low power IoT applications.

Improvements in OPV efficiency and stability have largely been driven by a recent technological transition. The first generation of OPV cells had the active, light-absorbing layer containing a blend of polymer and fullerene, with an energy level offset between the materials enabling charges to be separated and thus current to be produced. The fullerene is known as an acceptor material and was regarded as an essential component of an organic solar cell. However, fullerene-based molecules have now largely been replaced with non-fullerene acceptors (NFAs). This technological transition brings multiple benefits, including: 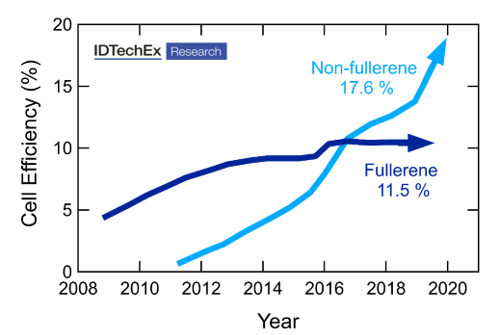