Given the exciting properties, graphene has always been linked as a revolutionary material for the electronics industry. CVD graphene is cited as the ideal solution in providing a perfect single layer produced in a low cost continuous R2R process, but the manufacturing and commercial reality have proved very different.

After a long period of research, and with players regularly exiting and entering the field, we are only now starting to see this technology mature and the dawn of the commercial reality. There are two approaches to graphene production, a “top-down” approach (from graphite) or a “bottom-up” method (predominantly CVD grown). 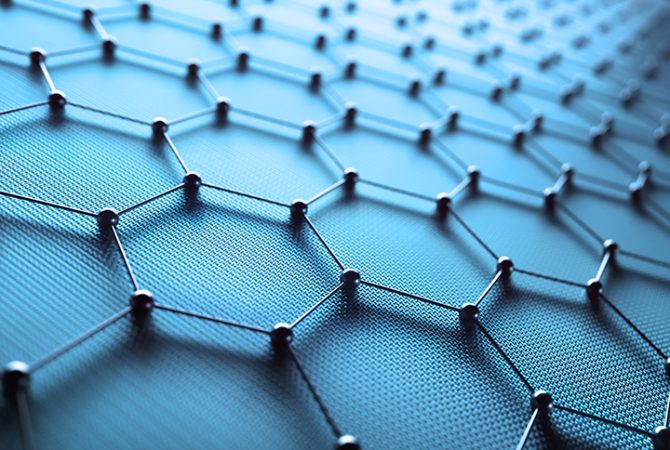 The top-down approach, producing graphene powders and nanoplatelets, is what will dominate the market in both the short and mid-term. These are used for a wide range of applications, including energy storage, polymer composites, coatings, thermal management, and more.

IDTechEx forecast this to exceed $600m in revenue for the nanoplatelets and powders alone within the next decade. Most of these applications use graphene as a liquid or solid dispersed additive displacing the likes of carbon black or enabling new features. There are electronic applications, such as the use in conductive inks, but that is overall a far smaller market share. Instead, most of the electronic applications have been centered around CVD grown graphene.

Could be truly revolutionary to the electronics sector

CVD stands for chemical vapor deposition; this is the concept of growing your 2D graphene material on a surface (usually copper or nickel) using a hydrocarbon or alternative feedstock. The dream of CVD graphene is to grow a low cost, pure, perfect single layer in a continuous R2R production; if this were to be achieved, it would be truly revolutionary to the electronics sector.

Many companies have spent a lot of money chasing this goal, including Samsung, Sony, and LG Electronics. However, there are multiple challenges in both the production and transfer of these films, mostly linked with metal contaminants and defects. When looking to commercialize their CVD grown graphene, many manufacturers have ended up in a situation of “material push” rather than “market pull”. IDTechEx has seen multiple innovations and developments in this field as the technology evolves and begins to mature, but a stepwise innovation is required to reach that holy grail.

The initial hype around graphene in the electronics industry was for transparent conductive films (TCF) and revolutionizing the semiconductor industry. The commercial reality is very different; in TCFs, CVD graphene struggles to compete with the incumbent materials (such as ITO), and the lack of bandgap limits the use as a semiconductor. A bandgap can be introduced, but that is typically at the expense of the electron mobility or other properties that make graphene so attractive.

Too early to say whether 2D semiconductors will transform transistors

This remains a very active area of research, and IDTechEx has observed some notable commercial jumps that could rapidly accelerate this. Observing the patent landscape also shows the extensive activity for electronic applications, particularly from Samsung and the Semiconductor Energy Laboratory. Meanwhile, the increasingly significant Taiwan Semiconductor Manufacturing Company (TSMC) stated in a 2019 article that “It’s too early to say whether 2D semiconductors will transform transistors. But they are one of the best candidates we have to extend Moore’s law.”

Rather than TCFs and semiconductors, the initial commercial activity has shifted to focus on sensors and photonics, where early success and demand is now being seen. Taking advantage of graphene’s conductivity, surface area, and other unique properties, a wide range of sensor applications are gaining significant momentum in numerous sectors. Previous impressive examples came from the likes of Bosch, but with quality and reproducibility challenges, there had been limits until now.

As mentioned, we have seen activity from some of the R&D divisions of the world’s largest companies, equipment manufacturers (such as Aixtron), dedicated manufacturers, and still a large amount from research institutes. Graphenea is one of the oldest and most established dedicated manufacturers in the field. Some of their most exciting activity to date has been in the development of a visible to shortwave infrared (Vis-SWIR) photodetector with Emberion. This is just the start of some of the applications they see, as their Head of Foundry, Dr. Elías Torres Alonso told IDTechEx.

“Graphenea is seeing notable adoption for graphene-based devices, particularly in the biosensing/healthcare and photonic fields. Graphene biosensors will provide a platform for the digitalization of the diagnostic, especially relevant in PoC applications. As 5G is being rolled out, graphene-based optical modulators may become useful for future 6G protocols and emerging computing schemes such as photonic FPGAs.,” says Alonso. “After extensive work, Graphenea has achieved a level of technological maturity within their processes that enable applications in both fields to be developed, scaled, and commercialized. Graphenea Foundry offers different process flows which can accommodate a myriad of device architectures and technologies.”

Initially used in a magnetic sensor

This industry is still ripe for disruption and new entrants. A notable new player is Paragraf, who formed in 2017 and raised £16.2m in Series A funding in 2019. The company spun-out of the University of Cambridge and use MOCVD to directly grow high-quality graphene on a variety of substrates, avoiding challenges with copper (or similar) contamination. They have long term plans for semiconductor applications but have seen the technology validated and initially used in a magnetic sensor. Dr. Simon Thomas, CEO of Paragraf, spoke to IDTechEx.

As with many areas, there is often a long period of research. One of the most notable research announcements is from IMEC, as part of the graphene flagship, looking to install a pilot line. AMO has also been active in this field for many years and in 2019 spun-out an organization called Black Semiconductor, a startup making active photonic circuits on any electronics. The firm’s technology enables ultrafast chip-to-chip interconnects and broadband visible to infrared on-chip sensors.

Graphene is just the first in a whole family of emerging 2D materials. There is a huge amount of R&D interest in materials beyond graphene, such as boron nitride and transition metal dichalcogenides (TMDs) that bring new properties such as being dielectric or having a tunable bandgap. There are still many early-stage manufacturing challenges, but CVD growth processes are showing some very promising results. Many materials scientists envisage being able to build up these 2D material stacks like an “atomic Lego”. Grolltex are another notable company in CVD graphene with a significant production capacity and exciting adoption for biosensors.

“Grolltex, for ‘graphene-rolling-technologies’, is the largest commercial provider of CVD graphene in North America, offering monolayer graphene, monolayer hBN, and in Q1 2021, monolayer MoS2 as well, thereby providing all three circuit element materials needed (conductive, insulating, and gate) for nano-device designers,” saysGrolltex CEO Jeffrey Draa. “The company’s current capacity is 19,000 eight-inch wafer equivalents per month. Additionally, the company is helping many of its biosensor customers convert their devices from ‘on silicon wafer’ designs to ‘on plastic’ instead, enabling extreme cost savings of up to 100x in some cases, as well as almost unlimited packaging and form factor options.”

CVD grown graphene is at the first point of market adoption and significant growth as it finds values in specific applications. However, this industry is still evolving. There remains a huge amount of research that could take the industry in a wide range of technologies; this is seen in early-stage work, such as the emergence of spintronics, through to new companies like GraphAudio making acoustic products. Magic-angle graphene has sparked many researchers’ imagination since a breakthrough paper in 2018; this has launched the new field of twistronics, giving even more dimensions and potential to 2D materials.

Complementary role in other applications

As discussed, R2R graphene grown on copper is still a highly active area. Using the graphene on the copper and avoiding the transfer challenges still being tackled could be advantageous for certain electronic applications, such as reducing the precious metal requirements on interconnects, but also play a complementary role in other applications. General Graphene Corporation is an established player in R2R graphene production, with their latest scaled-up production process coming online at the end of Q1 2021. It was stated that they see potential in numerous sectors, but the initial key market is anticipated to be in energy storage.

The focus of this article, and the activity in the industry, has been on overcoming the manufacturing hurdles, but the economic challenges are not to be ignored. Selling low-volume GFET chips to R&D divisions is very different from a large purchase order; as some of the company’s scale-up, the price point achieved, alongside the quality and properties, will be essential to consider.

It would be amiss to limit this article to just graphene, CVD grown diamond and carbon nanotubes are also set to have a significant impact on the electronics sector. Partnerships, acquisitions, funding rounds, and more are all being seen as people prepare for this next revolution. IDTechEx has a dedicated report on carbon nanotubes; as with graphene, there is a wide range of CNT types (single-walled vs. multi-walled, chirality considerations, etc.) and the electronic applications are diverse from gas sensors to in-mold electronics. Perhaps the most significant here is the work from Nantero, on what they refer to as the new generation of memory called NRAM; this has been licensed and is being taken to market by Fujitsu.

For more information on this report, please visit www.IDTechEx.com/Graphene