Users in some markets focused on well-being, fitness and activity tracking as a result of the pandemic.

Demand for smart wearable devices such as smartwatches and fitness trackers remained robust during the pandemic, with technology market analyst company CCS Insight forecasting sales growth of 24% in 2021 to 239 million units worldwide in its latest update.

“Like several other technology product categories such as laptops and tablets, smart wearable devices were winners in 2020 despite the problems thrown up by the Covid-19 pandemic”, observes Marina Koytcheva, VP forecasting at CCS Insight.” This contrasts with other products such as mobile phones which recorded a 13% drop in global demand in 2020.”

CCS Insight’s report indicates an impressive 22% growth in unit sales for smartwatches and fitness trackers in 2020, with 193 million units sold, making it a market of almost $24 billion. 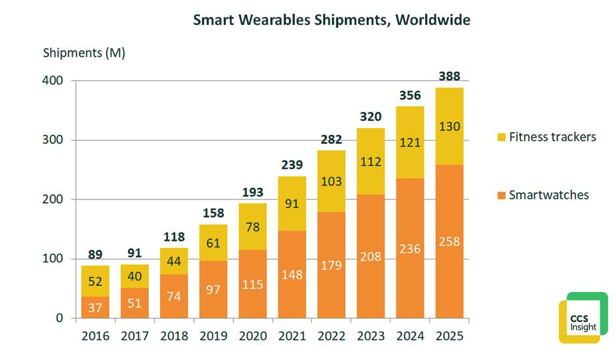 Leo Gebbie, senior analyst, wearables at CCS Insight notes “When many people were confined to their homes for prolonged periods and exercise became a highlight of the daily routine, there’s no doubt that well-being, fitness and activity tracking became a priority for many. Exercise and activity regimes moved from gyms to outdoor spaces, making a smartwatch or a fitness band that tracks steps, distance, heart rate and other activity metrics more attractive than ever for lots of people.”

Wearables are resonating well with consumers

The report notes that smartwatches from brands such as Apple, Samsung, Garmin, Fitbit and Amazfit were the preferred choice for 60% of those who splashed out on a new wearable in 2020, while 40% went for the simpler and cheaper alternative offered by a fitness band. CCS Insight expects this trend will continue in 2021 and beyond. Over 1.2 billion devices are expected to be in use by the end of 2025, with yearly sales approaching 400 million units in the year.

Gebbie observes, “Smart wearables are resonating well with consumers around the world. To date, this growth has been fuelled by the seemingly unstoppable success of the Apple Watch, but we’re betting the next wave of strong growth will be boosted by tapping into the huge number of Android smartphone owners who have not been tempted by wearable tech so far.”

Stuck at home during the pandemic

CCS Insight notes that this process is already underway, and despite Apple’s strong volume growth, its market share is estimated to have shrunk from 55% of smartwatch sales in 2019 to 47% in 2020 when kids’ smartwatches are excluded. Google has been eyeing up the smartwatch opportunity for some time. However, its approach to date has been a dismal failure, with its Wear OS operating system accounting for a meagre 3% of smartwatch sales in 2020. It will be hoping its acquisition of Fitbit will change its fortunes to prevent rivals from running away with the prize.

A segment that struggled in 2020 but is expected to bounce back in 2021 is smartwatches for kids. Koytcheva comments, “There was little incentive to make a purchase while schools were closed and kids were stuck at home during the pandemic, but we expect 28 million devices will be sold in 2021, representing growth of 32% year-on-year. That said, with over 90% of sales coming from China, smartwatches for kids cannot be viewed as a global phenomenon just yet”.

One opportunity that has still failed to materialize in a meaningful way is cellular-enabled wearables, devices that have built-in cellular connectivity and can be used without being linked to a smartphone. These premium devices have failed to take off even though they are an attractive product for manufacturers, as well as mobile operators keen to get more gadgets connected to their networks.

Gebbie notes, “Marketeers still have a lot of work ahead to explain the true benefit of owning a cellular-enabled smartwatch. I expect a big push in this area in the next few years focussing on outdoor fitness and exercise, as these are times when users may not want to take their smartphone with them”.

Reflecting this optimism, CCS Insight believes that of all the 258 million smartwatches that will be sold in 2025, about 40% will feature cellular connectivity, some targeted at kids, and others at the wider population of wearable tech users.