MDA announced that it has been awarded a contract from the Canadian Space Agency (CSA) to develop Canadarm3, the third generation Artificial Intelligence (AI)-based robotic system destined for ‘Gateway’, a lunar-orbiting international space station. The contract involves the award of Phase A of the Canadarm3 program, with options for the follow-on phases. 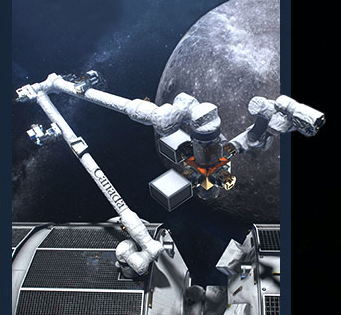 As MDA’s most ambitious space exploration project yet, Canadarm3 will operate aboard Gateway, a NASA-led deep space outpost that will orbit the Moon beginning in the mid-2020s, supporting both human and robotic missions to the lunar surface, serving as a science laboratory, and acting as a proving ground for exploration missions into deeper space.

Canadarm3 will include the full robotics system, comprised of an eXploration Large Arm (XLA), an eXploration Dexterous Arm (XDA), specialized tools for performing maintenance and science tasks, as well as the ground control systems and AI-based control and mission planning software.

Because of extremely limited and delayed communication with the ground due to the Gateway’s location some 400,000 kilometres from Earth, Canadarm3 will be highly autonomous and will use its advanced AI-enabled sensors and systems to safely conduct operations without requiring oversight and monitoring by the ground or on-board astronauts. The ground planning and control operations for the system will take place exclusively in Canada, in contrast to the previous generation Canadarm and Canadarm2, also built by MDA.

This initial Phase A of the Canadarm3 program will establish the technical requirements needed for the future design and manufacturing of the robotic system. This phase will further evolve the concepts developed by MDA in Phase 0 and advance the readiness level of critical technologies. Follow-on phases include Phase B (preliminary design), Phase C (final design) and Phase D (manufacturing, integration and test).

MDA has also committed to produce a ‘Value Proposition’ through the Government of Canada’s Industrial and Technological Benefits policy that will optimize economic benefits to Canada from the Canadarm3 investment.

“In addition to delivering the most advanced space robotics system ever built, the Canadarm3 program will serve as a catalyst for economic and socio-economic benefits in Canada,” says Mike Greenley, chief executive officer of MDA. “It will inspire a new generation of Canadians to think about what can truly be accomplished here in Canada.”