Kraken Robotics Inc., St. John’s, Newfoundland-based designers and developers of ocean-based technology, has signed a contract with Danish Ministry of Defence, Acquisition and Logistics Organization (DALO) to supply mine-hunting sonar equipment to the Royal Danish Navy. This was a competitive bid process and under the program, Kraken will deliver its KatFish towed Synthetic Aperture Sonar, Tentacle winch and Autonomous Launch and Recovery System (ALARS). 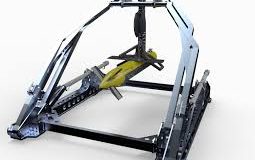 Kraken’s minehunting system will be integrated onboard the Royal Danish Navy’s optionally unmanned surface vessels (MSFs as seen in Figure). The total contract value is approximately $36-million, with the majority of that received over a two year equipment acquisition phase.

“We are very pleased to sign this contract – this was a very competitive process and we are proud to have been selected,” says Karl Kenny, Kraken president and CEO. “Kraken will be expanding its European presence with the establishment of a new Danish Centre of Excellence in Mine Counter Measures. This new operation will not only conduct research and development to further improve the capabilities of Kraken’s MCM solutions, but will also be able to offer local technical support for Danish customers. Kraken’s new Danish operation will also engage with local Danish companies, universities and technical institutes, ensuring a long term benefit to Danish technical development.”

Kraken Robotics also recently signed a contract to supply minehunting systems to the Polish Navy. As part of this contract, Kraken will deliver its KatFish towed Synthetic Aperture Sonar, Tentacle Winch and Autonomous Launch and Recovery System (ALARS) in the second half of 2021. Kraken’s equipment will be integrated onboard the Polish Navy’s new Kormoran II Mine CounterMeasure (MCMV) vessels in Gdansk, Poland.

“Due to confidentiality reasons, Kraken cannot disclose specifics about the contract – other than to say that it is significant and that we expect it to be a strong enabler within other NATO nations,” says Karl Kenny, Kraken president and CEO. “Should the Polish Navy be successful in exporting its new Kormoran II MCMVs to other countries, we could see additional KatFish and ALARS sales opportunities in these international markets.”