Sector buoyed by response to new demands and opportunities, according to IDC

The market for wearable devices grew 14.1% during the second quarter of 2020 (2Q20), thanks to strong demand for hearables and continued interest in tracking health metrics during the pandemic. While the total market ballooned to 86.2-million units during the quarter, the growth was unevenly spread across the various form factors according to new data from the International Data Corp. (IDC) Worldwide Quarterly Wearable Device Tracker.

“Hearables show much stronger and broader demand than smartwatches and fitness trackers,” says David Myhrer, research vice president for IDC’s consumer technology strategy service. According to data from a recent IDC survey, self-reported consumer spend in the U.S. on hearables built throughout the quarter and into July, up 7% over the April benchmark. Comparable self-reported spend on smartwatches and fitness trackers was down by about a third.

“The data make it clear just how discretionary a purchase smartwatches and fitness trackers are. Demand among those with low incomes has dried up almost completely. Meanwhile, consumers at the top of the market remain bullish,” adds Myhrer.

“Around the world, many organizations have also started to use wearables to help the fight against COVID-19,” says Jitesh Ubrani, research manager for IDC Mobile Device Trackers. “Not only are wearables being used to track symptoms, but also to warn wearers when social distance isn’t being matained.”

Lastly, the wearables market has benefited from COVID-19 as many vendors have seen an uptick in services. “Health continues to be at the forefront of use cases for wearables, but with gyms closing and outdoor activities limited, users have opted for online or in-app fitness sessions and this has ultimately helped vendors to ramp up the services side of their wearables businesses,” comments Ubrani. 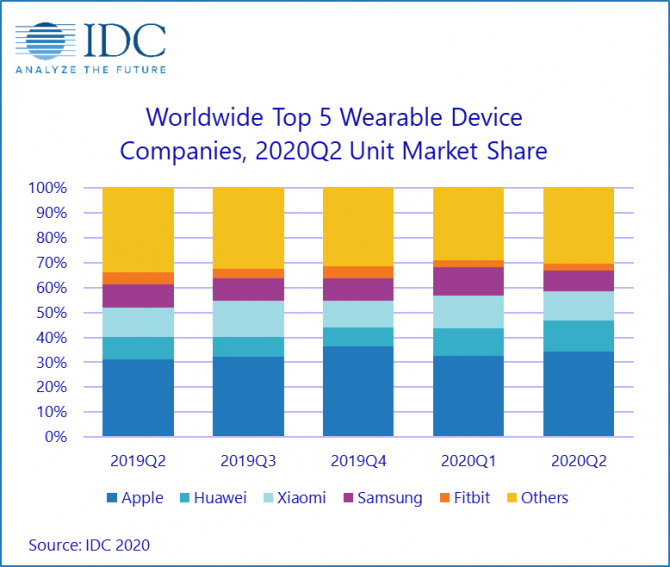 Hearables* grew 32.6% and accounted for 60% of all wearables during the quarter. Apple led the charge here as it managed to ship 23.7 million Airpods and Beats products, followed by Samsung and Xiaomi. This category continues to be dominated by smartphone brands as the opportunity to bundle remains high while traditional headphone makers such as Sony, Bose, Jabra, and others rank lower but focus on the premium end of the market. Earworn wearables continue to be popular as people work/learn from home and require hearables to maintain privacy while remaining connected with their various devices and services.

Watches and Wristbands represented 39.2% of all shipments, down from 46.8% in the second quarter of 2019. Combined, shipments for these devices declined 4.4% from last year and totaled 33.7 million units. The top vendors – Apple, Huawei, and Xiaomi – gained share and dominance while many other vendors struggled to convince consumers that these devices are “must haves” during an economic downturn. That said, there have been signs of positivity as some brands, such as Fitbit, invest in disease detection while others, such as Samsung, have deployed wearables to track physical distance between wearers in order to encourage social distancing.

Other wearables, such as clip-on devices or connected clothing, did not fare well during the quarter as the category declined 58.7% year over year. The one bright spot was Oura, which was recently adopted by the NBA in an effort to track players’ health during the pandemic. While the deployment has been relatively small and its efficacy remains unproven, it has nonetheless brought attention to wearables as a whole and may lead to a short-term bump for the entire category.