Researchers Identify the critical factors: friend funding, getting crowded and races to the goal 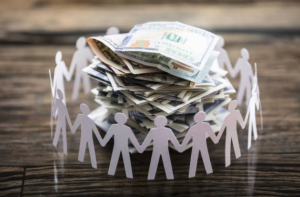 Crowdfunding is the process of raising capital from a crowd of investors through an online platform in order to produce new products or offer new services. Once a crowdfunding fundraising project reaches its goal, investors begin to receive returns on their investments.

In recent years, crowdfunding has been heralded as an untapped and vast new opportunity for entrepreneurs and start-ups who may have had challenges in obtaining funding from more traditional sources.

Where the process gains momentum

It’s commonly understood in business fundraising that there are three phases: a ‘friend-funding’ phase, where most funds are contributed by friends and family of the founders; a second phase known as the ‘getting crowded phase,’ where the process starts to build momentum beyond friends and family; and the ‘race to the goal phase,’ where the process gains momentum until the goal is achieved.

This study looks at this process and identified challenges and opportunities at each crowdfunding phase.

The research study titled ‘Modeling Dynamics in Crowdfunding’. It is authored by Chul Kim of the City University of New York; P.K. Kannan and Michael Trusov of the University of Maryland; and Andrea Ordanini of Bocconi University in Milan, Italy.

“In our research, we suggest three major drivers that lead to the dynamics in crowdfunding process: investors’ forward-looking strategic behaviour, social interactions among individual investors, and their expectations on the crowd’s behaviour” says Kim. “We found strong evidence for all three mechanisms and confirmed how they contribute to the dynamic patterns of crowdfunding”.

“In the middle stage where most of crowdfunding projects are likely to stagnate, it is very important to ignite the crowding process through social interactions among crowdfunders for successful goal completion,” says Ordanini. “In the end, once the crowdfunding project gains momentum, investors sitting on the sides waiting for the opportunistic moment will jump in and follow.”

“Based on these understandings on the crowdfunding dynamics, we identified for fundraisers the optimal goals that ensure intended results while raising the maximum capital,” said Trusov. “For the crowdfunding platforms, we arrived at ways to optimize targeting of the right investors, identifying those crowdfunders who have the potential to contribute the most to the program’s success. And, we have found ways to more accurately predict whether a crowdfunding campaign will succeed, and when it will succeed by observing early investment patterns.”